Off with it's head!

Last night I got the head removed from the XJ Jeep Cherokee I've been working on. This is what it looked like before I started: 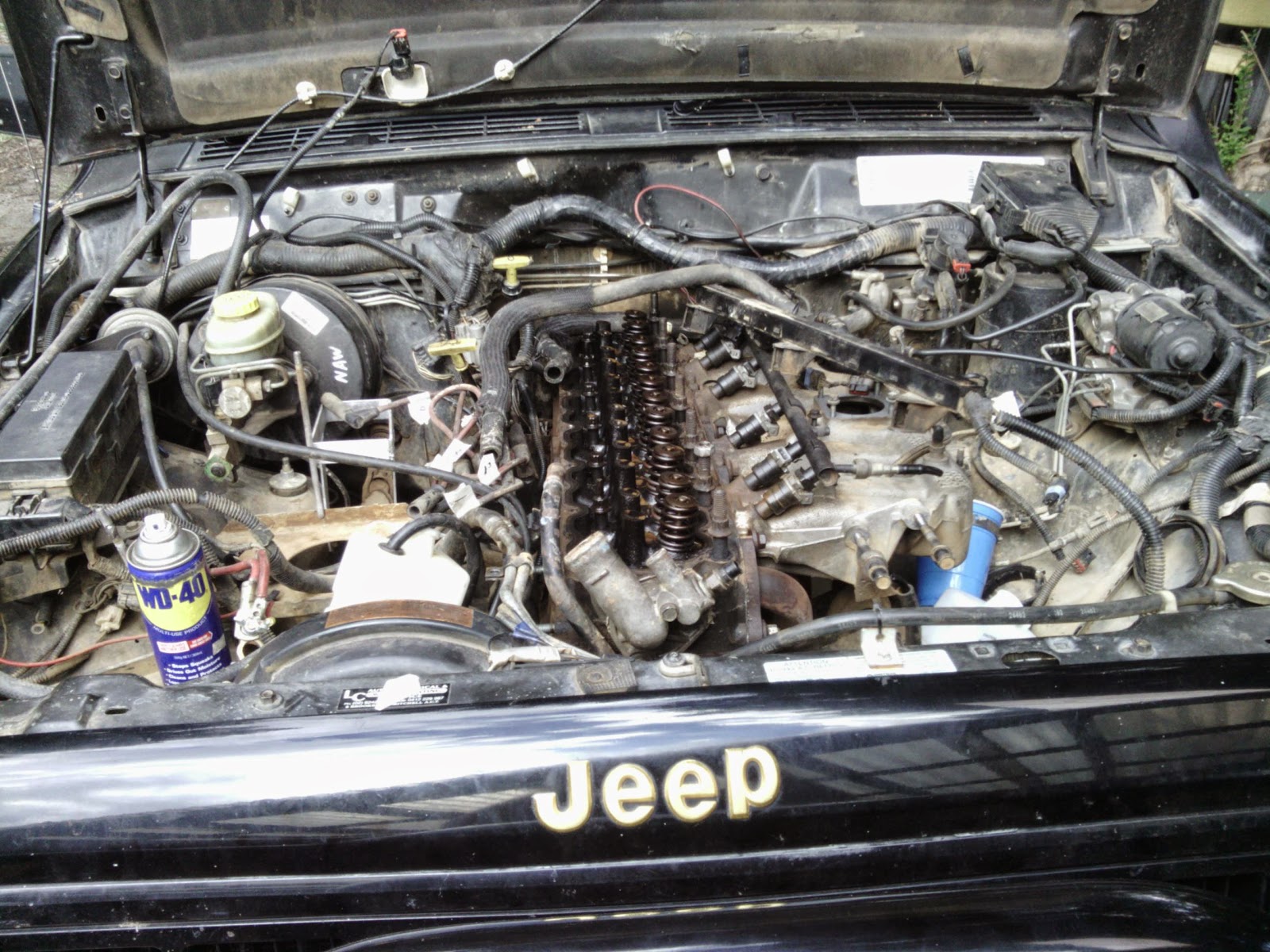 I decided to leave both manifolds on and just deal with the extra weight. It was heavy but it was still easier to do that than remove the bolts that are hidden under the intake manifold.

It's not very obvious but on this bolt there is a very thick black gummy something all over the threads. Not sure what it is but hopefully I'll be able to clean it off before I put this all back together. 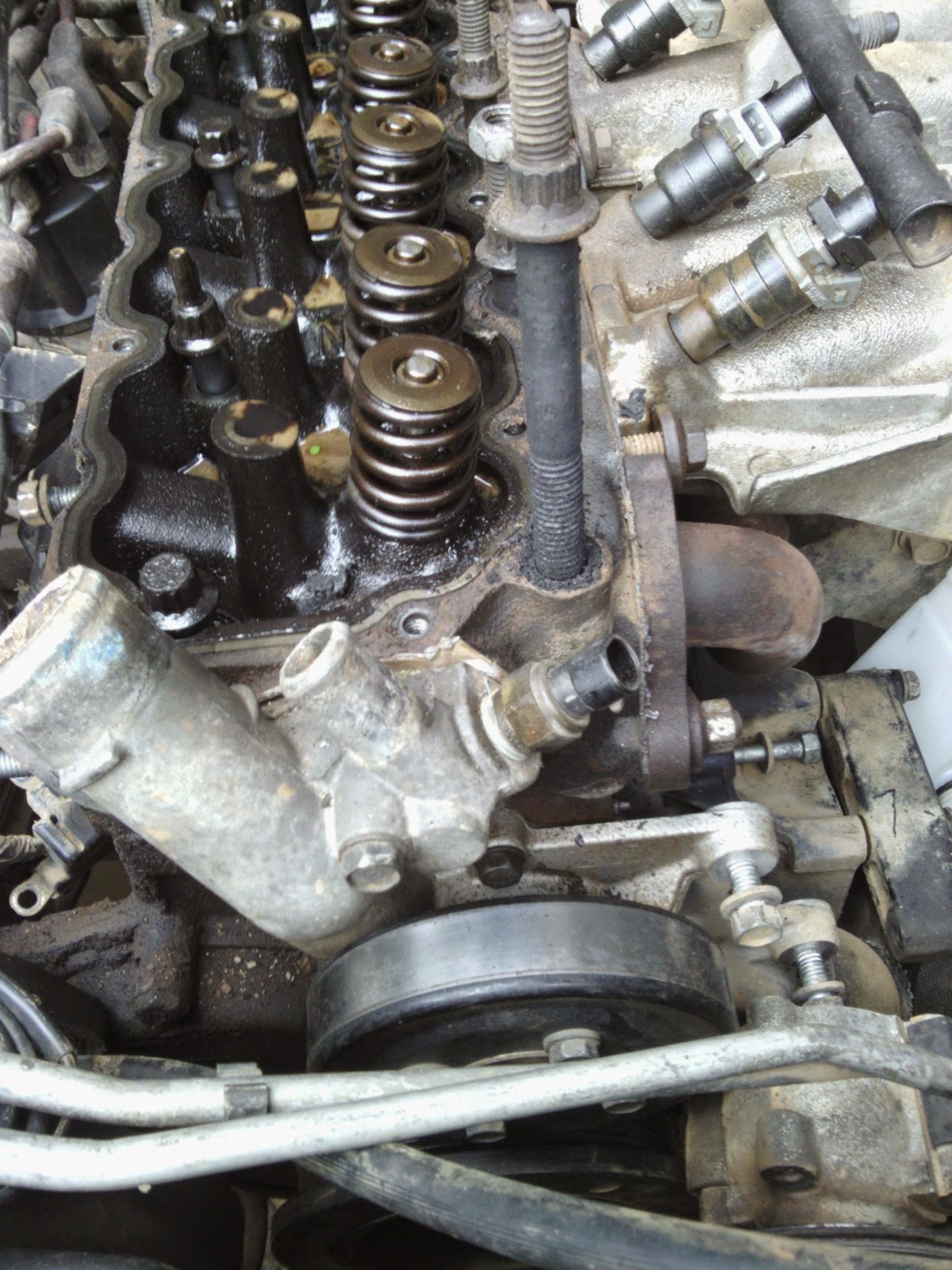 Here's a shot showing my highly sophisticated lifting mechanism with it halfway out: 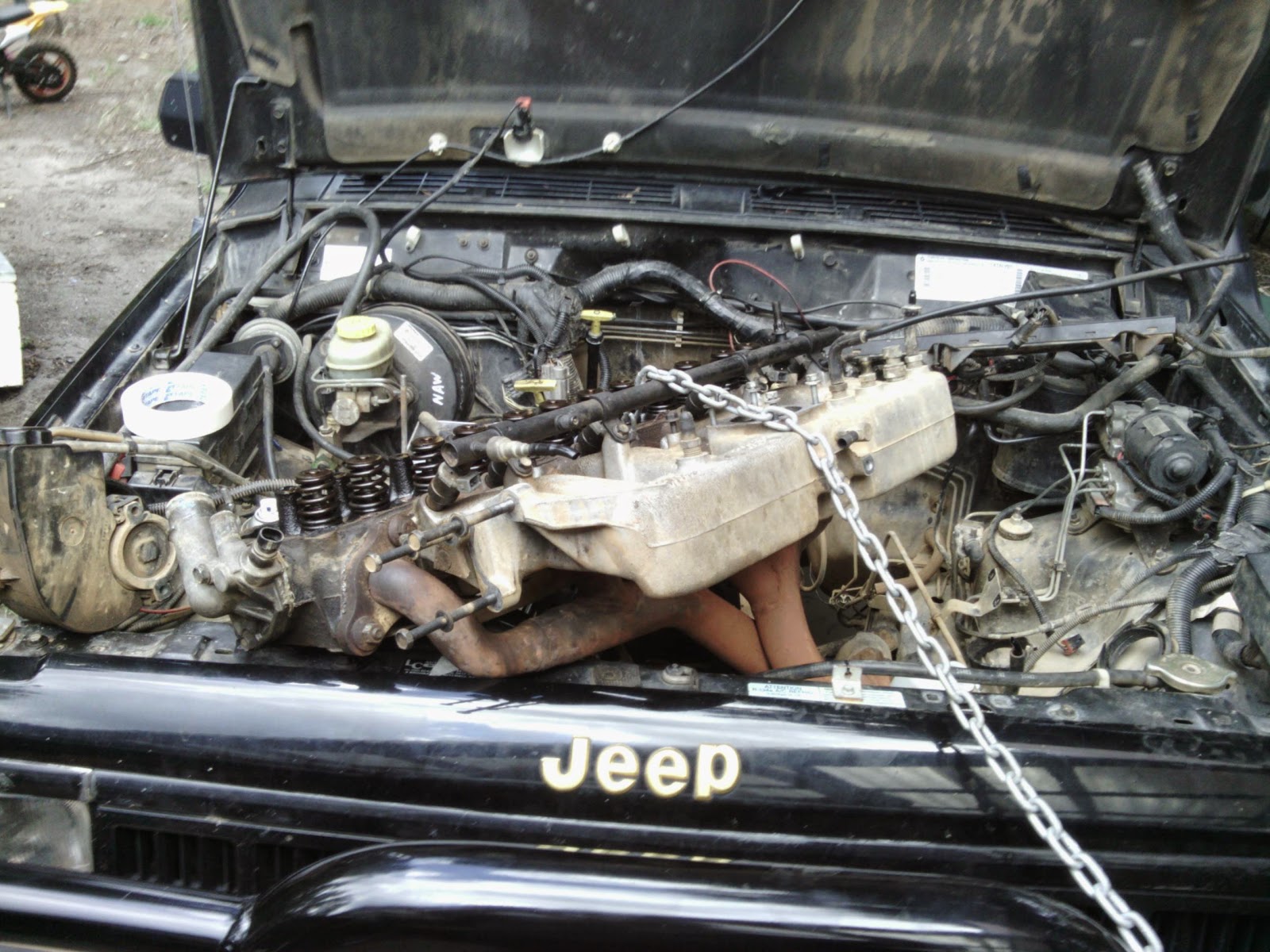 One of the bolts on the top for the manifolds is pretty well in the middle weight wise front to back so with the chain over that. With the chain secured I put a foot above the firewall and another one above the radiator; and lifted. Thank goodness for joining a gym is all I can say. I was able to lift it and with my able helper guiding the head I could move it between 1' and 6" at a time. Everntually I got it off the car and a bit lower, this is what it looked like then: 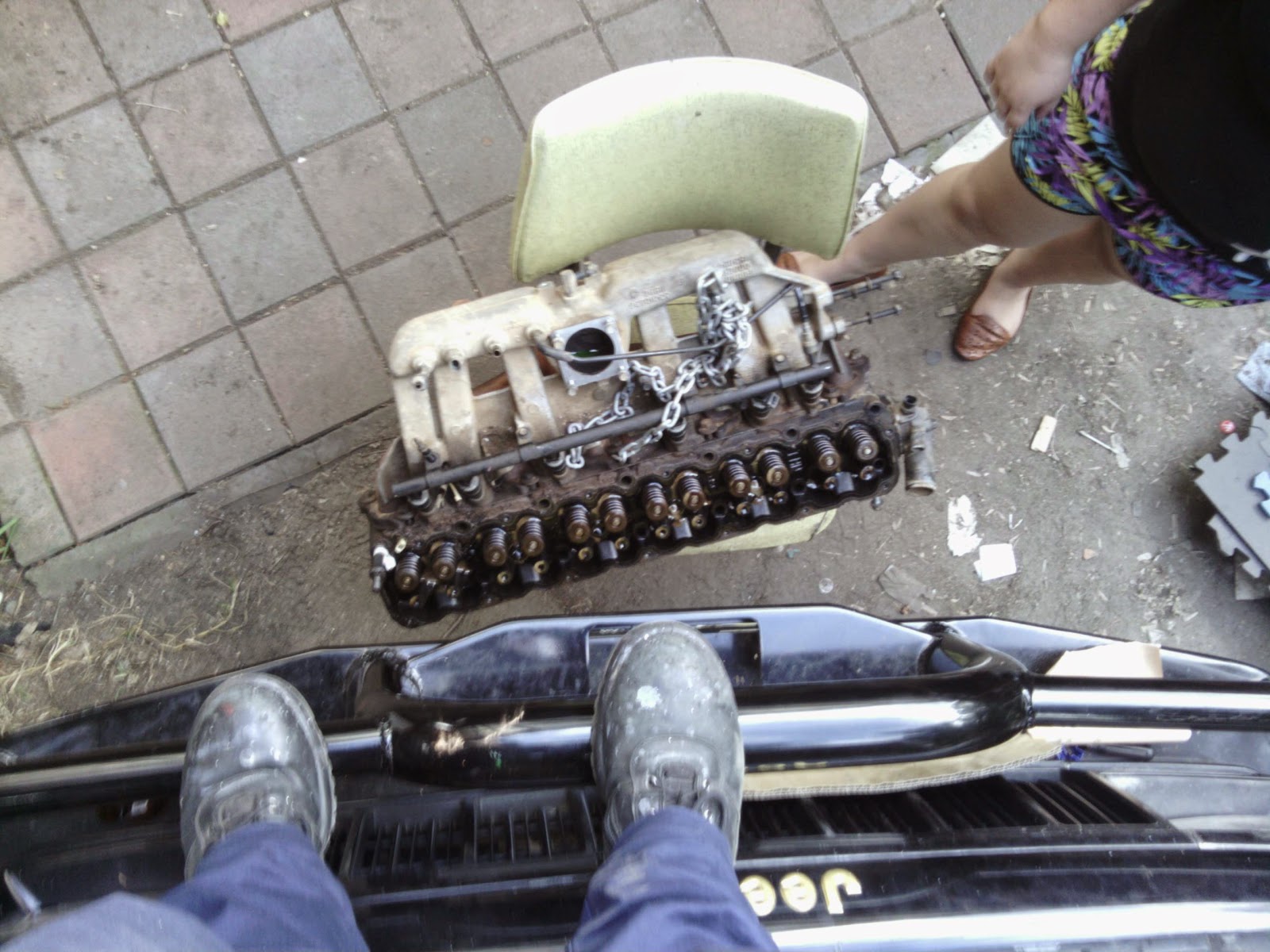 From there it was fairly easy to get my hands under it and carry it over to the bench; where it got turned over for removal of the gasket and preliminary inspection: 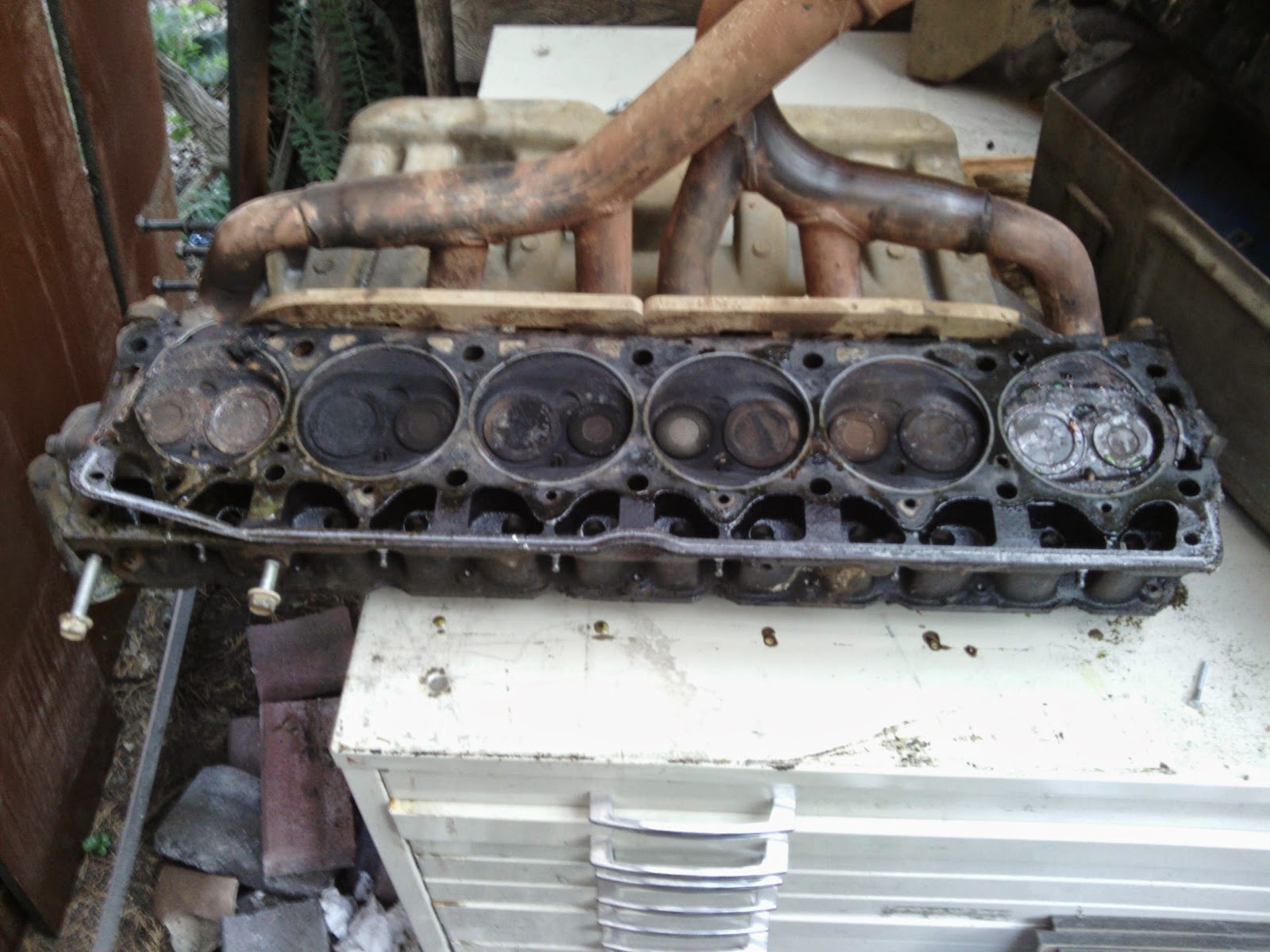 The gasket is still on here, as you can see near cylinder 1 it seems to have blown out completely and around cylinder 6 it's deformed and blown into the cooling jacket. Not good, you'll see the results of that a little further on.

It looks like when I had gotten it running cylinders 1 & 6 weren't working at all and as such don't have any sooty buildup in them. The other 4 cylinders do which makes me think that it possibly wasn't running properly, but that may have just been because it was cold and only had 4 cylinders going.

One more interesting point here is the exhaust manifold. From the build quality I hope nobody was paid to do it. The welds are not very fine and there were long bits of welding wire were sticking out in a few spots.

This is what the block looked like once I got back to it: 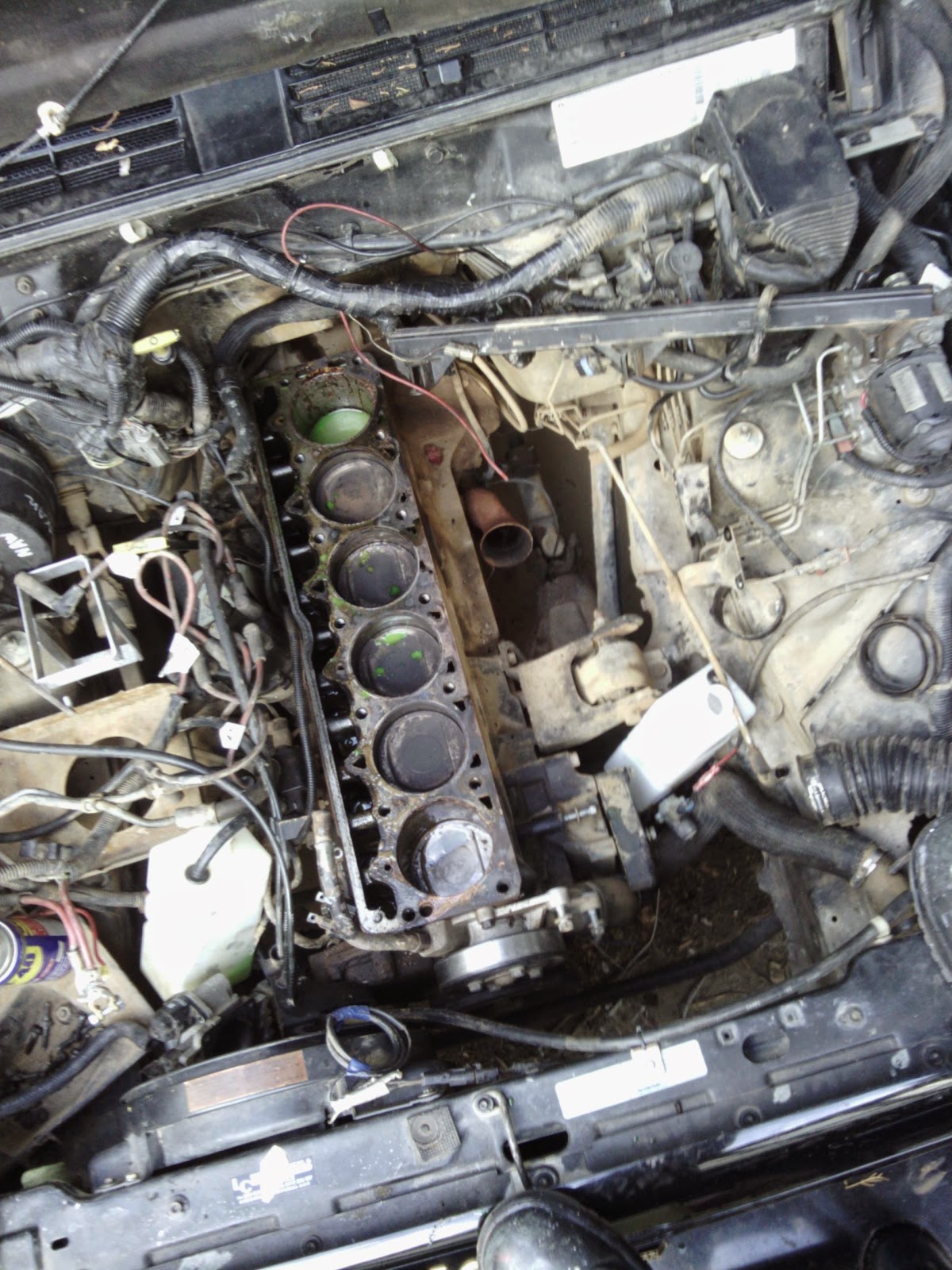 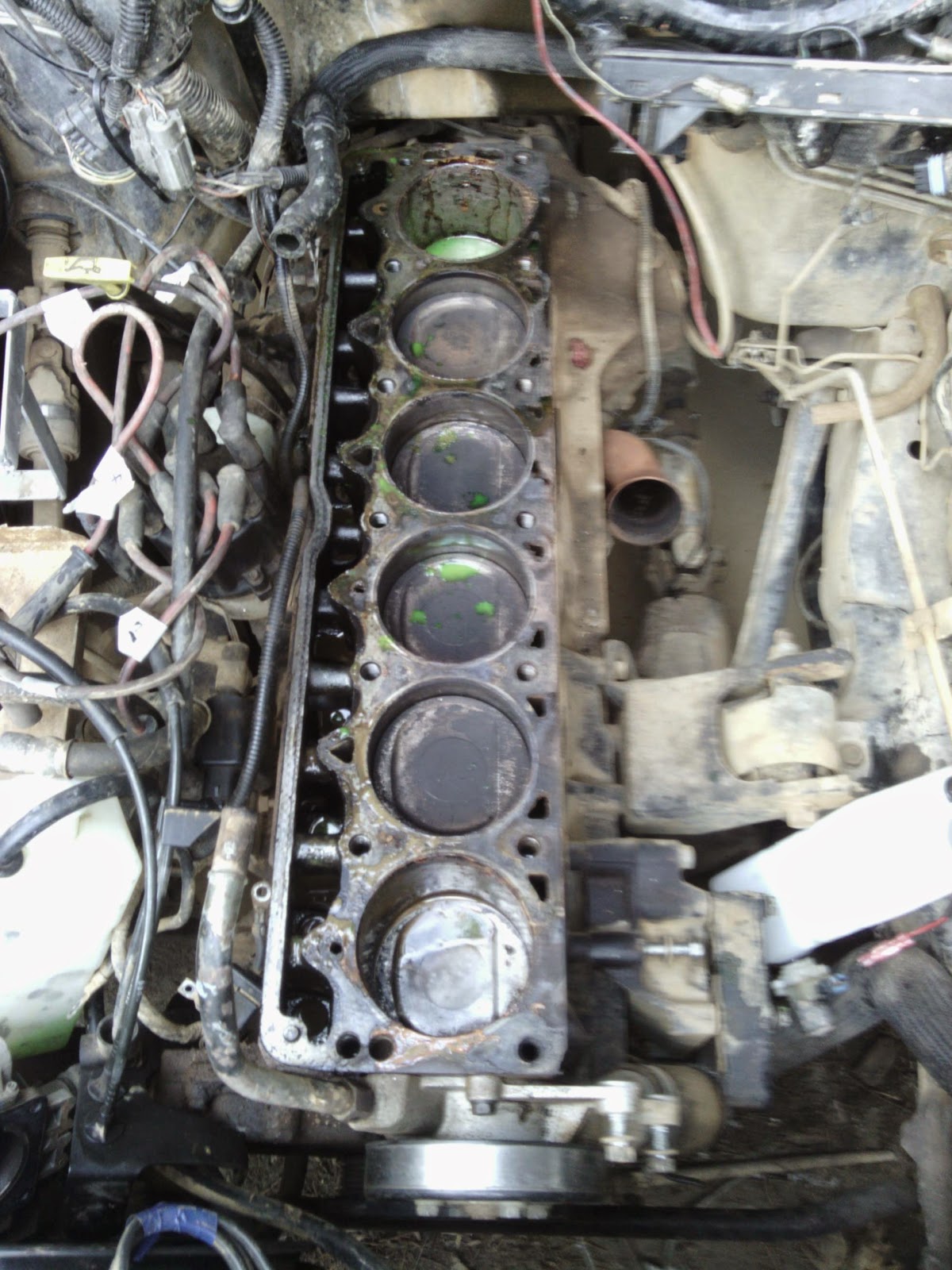 Not a very pretty sight. Just to see what would happen I tried turning it over with a socket. This went well and pretty easily. This allowed me to get that water out of number 6 and get a good spray of WD-40 over everything to help reduce any corrosion that may yet happen.This is what it looked like then: 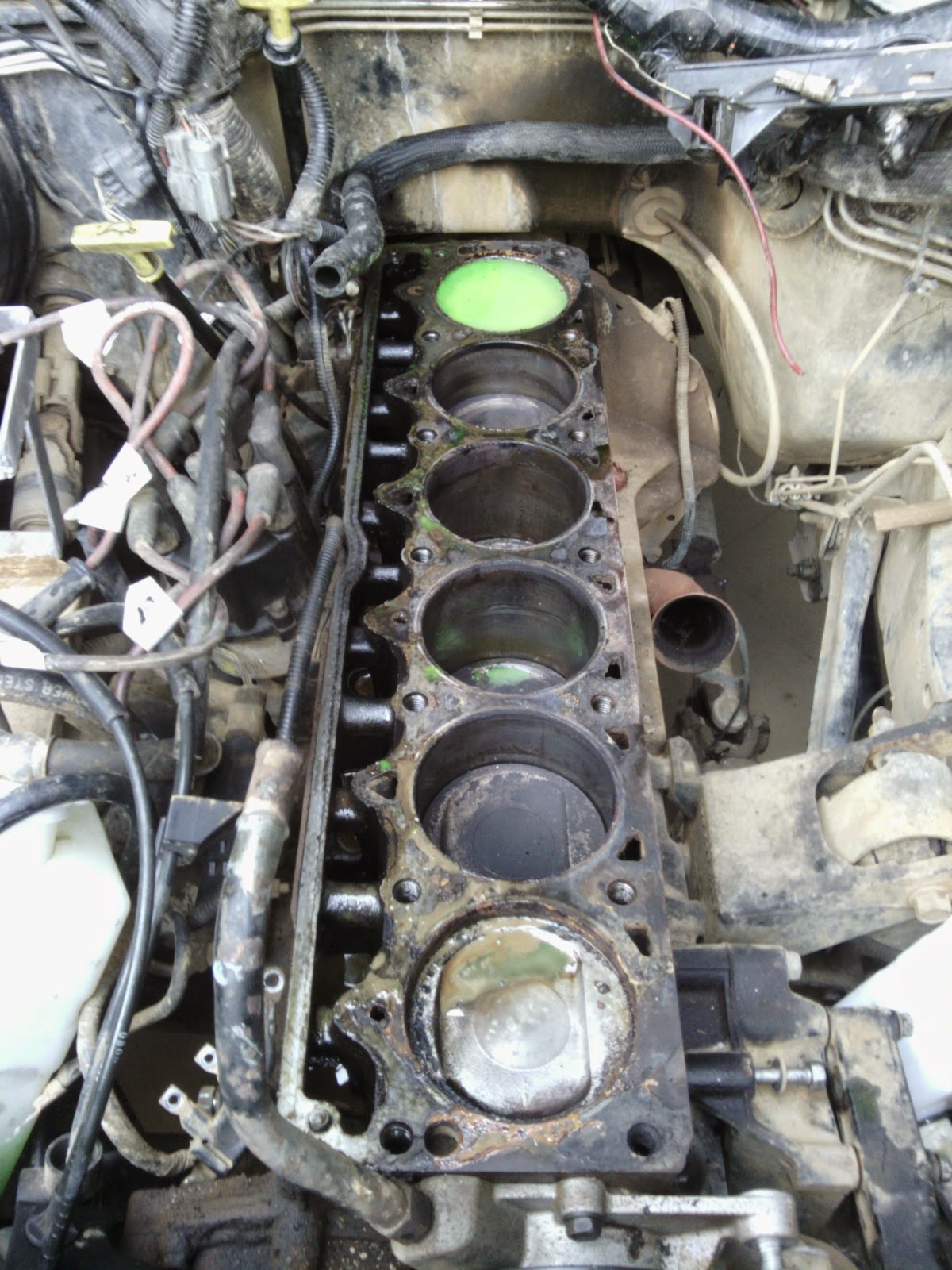 Most of the water in Number 6 ran out over the back of the block. So it will only need a little bit of mopping to get the rest out.

That's pretty much all there is, from not it will just be cleaning up parts, checking tolerances and buying replacements for a little while. So if I don't post for a little while don't worry, just getting everything prepared for the next stage.

Not much to report tonight, pretty much got everything sorted for removing the head tomorrow. Got the exhaust disconnected from the extractors from under here: 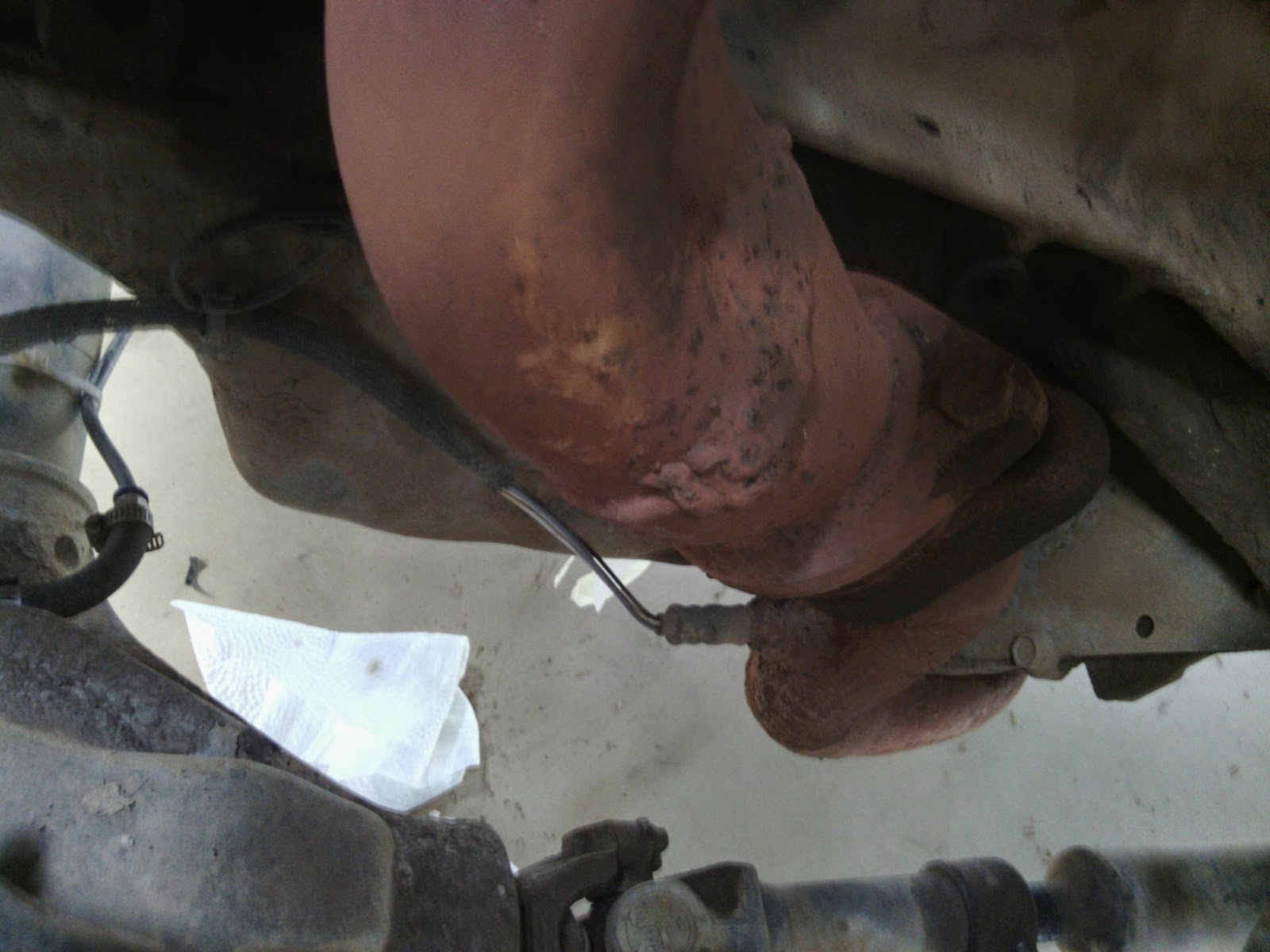 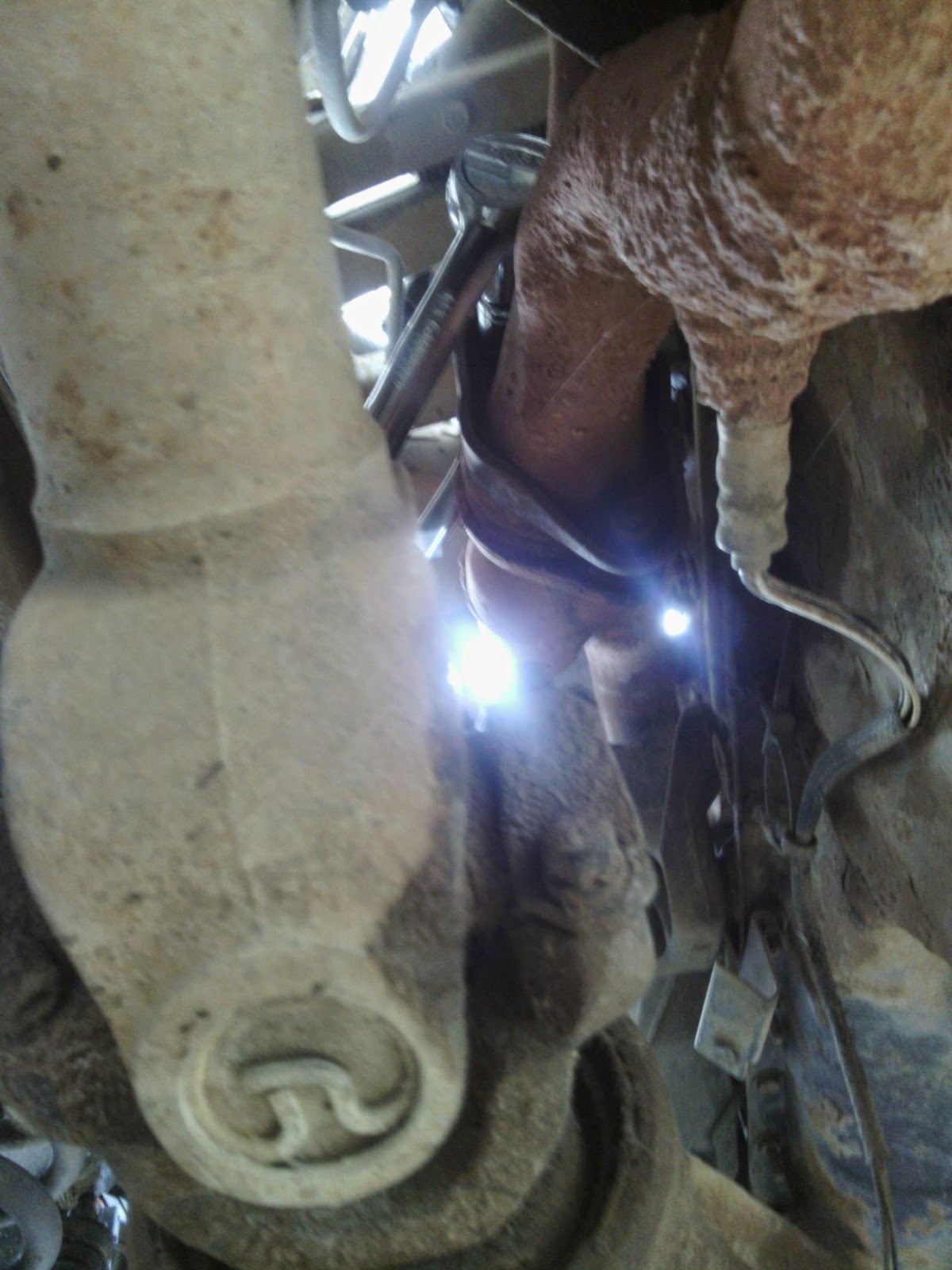 That was probably the nicest pair of nuts to undo today, even though there was only enough space for the ratchet to move 2 or 3 clicks at a time.

Got the bolts holding down the head off like this: 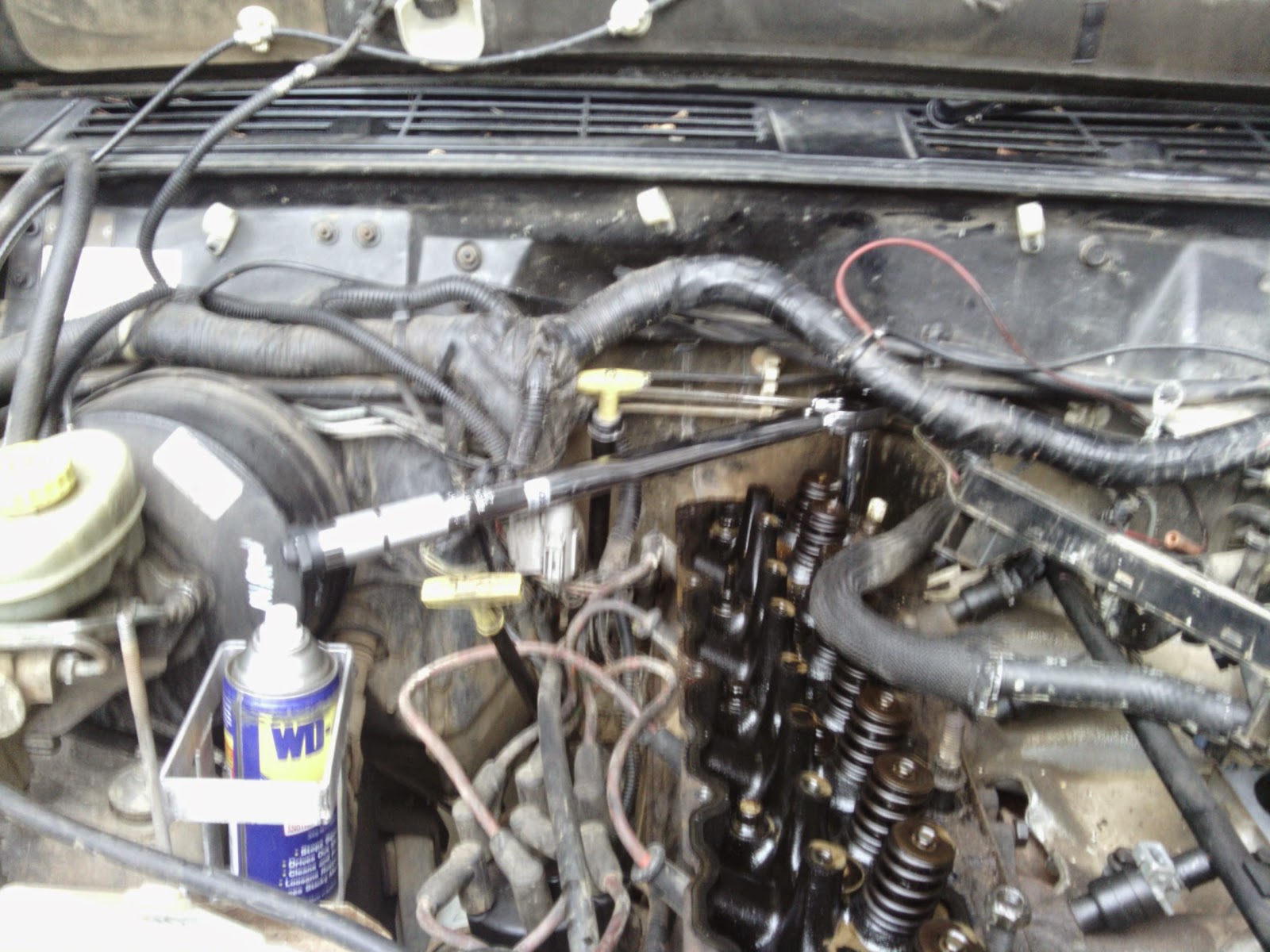 I only got to this state after removing a 11/16" nut holding down an earth strap. Unfortunately I didn't realize there even was a 11/16" spanner in the house, let alone that was the size for a good 20 minutes.

Also the manual says that the bolts holding the head on are 1/2" or 13mm. I tried them with a 13mm spanner and started to strip the 12 point head so I decided to buy a slightly smaller 1/2" deep socket. The fun thing about the 1/2" deep sockets sold at Bunnings is the hole in the middle is tapered, with the smaller end towards the bolt. This meant that the brand new tool I'd just driven across town and bought was actually not going to work. So after messing with sandpaper and getting nowhere a round file was found that was used to enlarge the narrow end of the taper just enough to be able to be pushed over the studs. However that is still not the end of the story. Because after loosening some of the bolts the socket would get stuck on the stud. The solution involved a hammer, a 1/4" drive socket extension and a sharp corner in the engine bay. By putting the extension down the middle of the socket so it was resting on the end of the stud, putting a sharp corner in between the socket and the stud I was able to tap them out. Thankfully.

By this time tomorrow I should have the engine in halves and some very interesting photos to show just how bad this engine has become.

So I didn't end up getting much (Anything) done on the Jeep last week and the weekend was busy with sailing on the James Craig and then doing maintenance at the Zig Zag Railway. However yesterday I feel I made some good progress and got the rockers and pushrods out. I also got the bucket with the old sump oil out from under the car. This is what it looked like after I pulled it out: 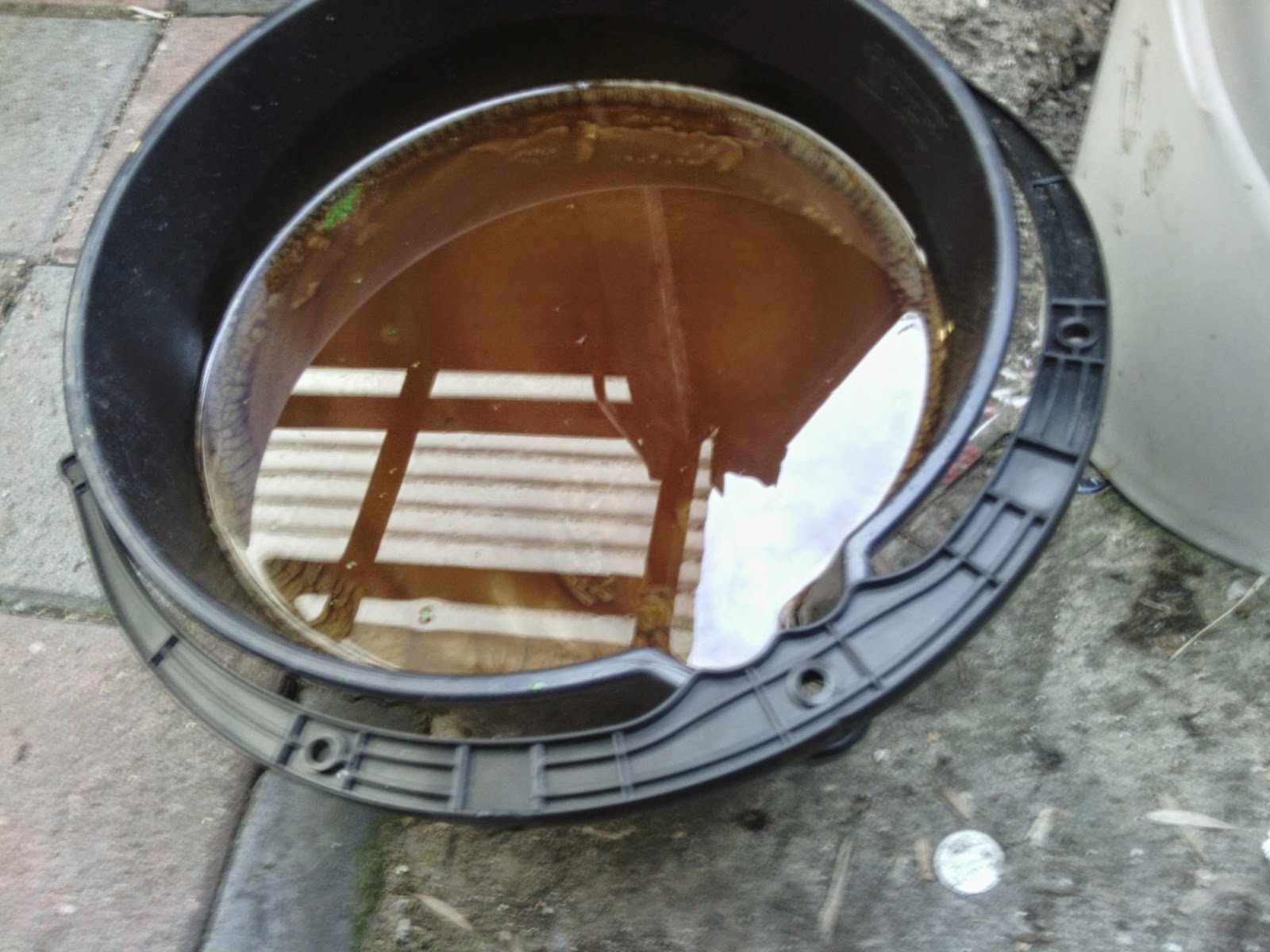 You can see some little bits of green from the coolant that has been getting into the oil.
This is what it looked like aft I stirred it up a little. The same as when it came out originally. 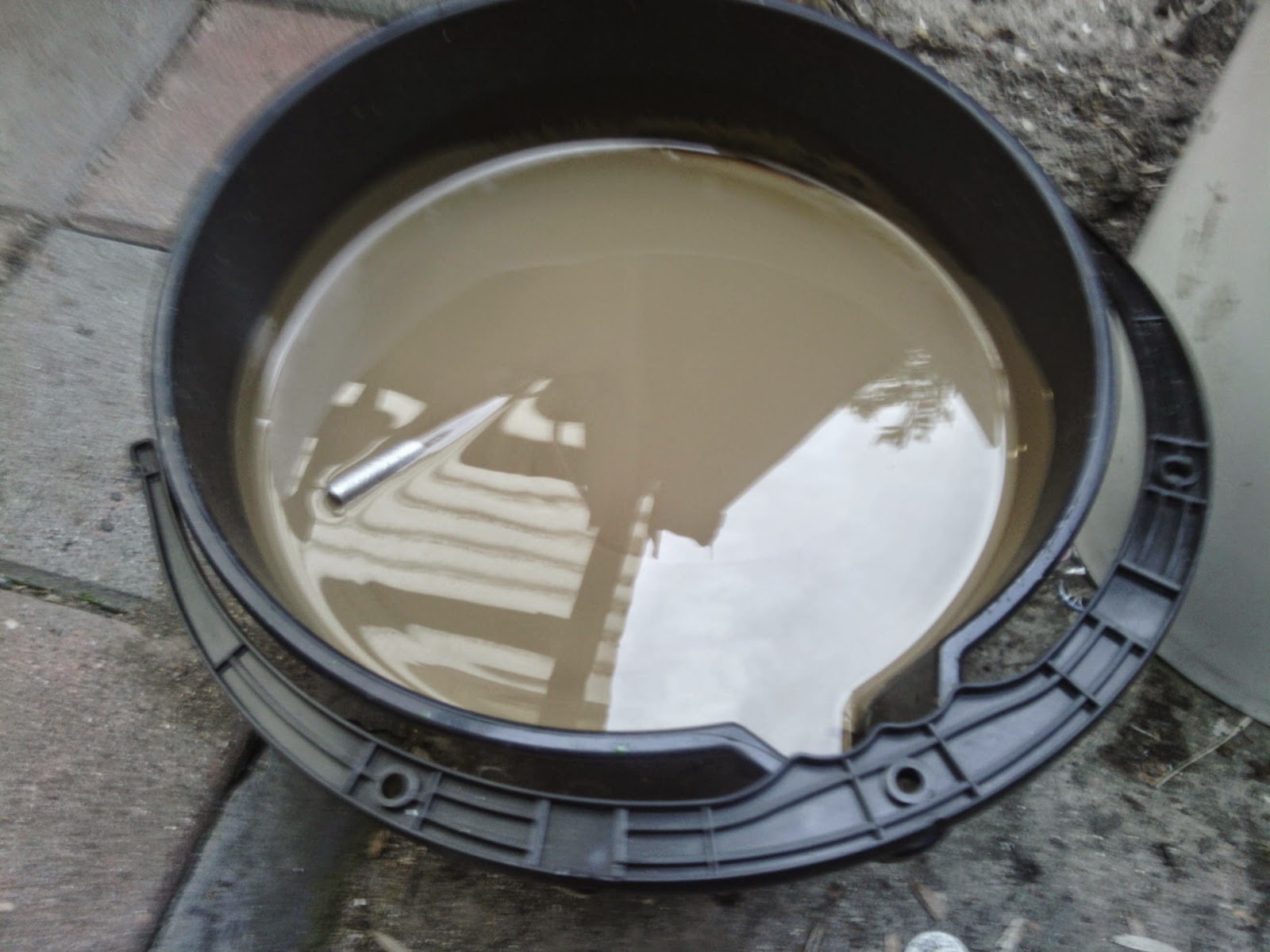 I also got the rocker cover and rockers/pushrods out.

It was pretty awkward to get to so this was how I was getting to pretty much everything: 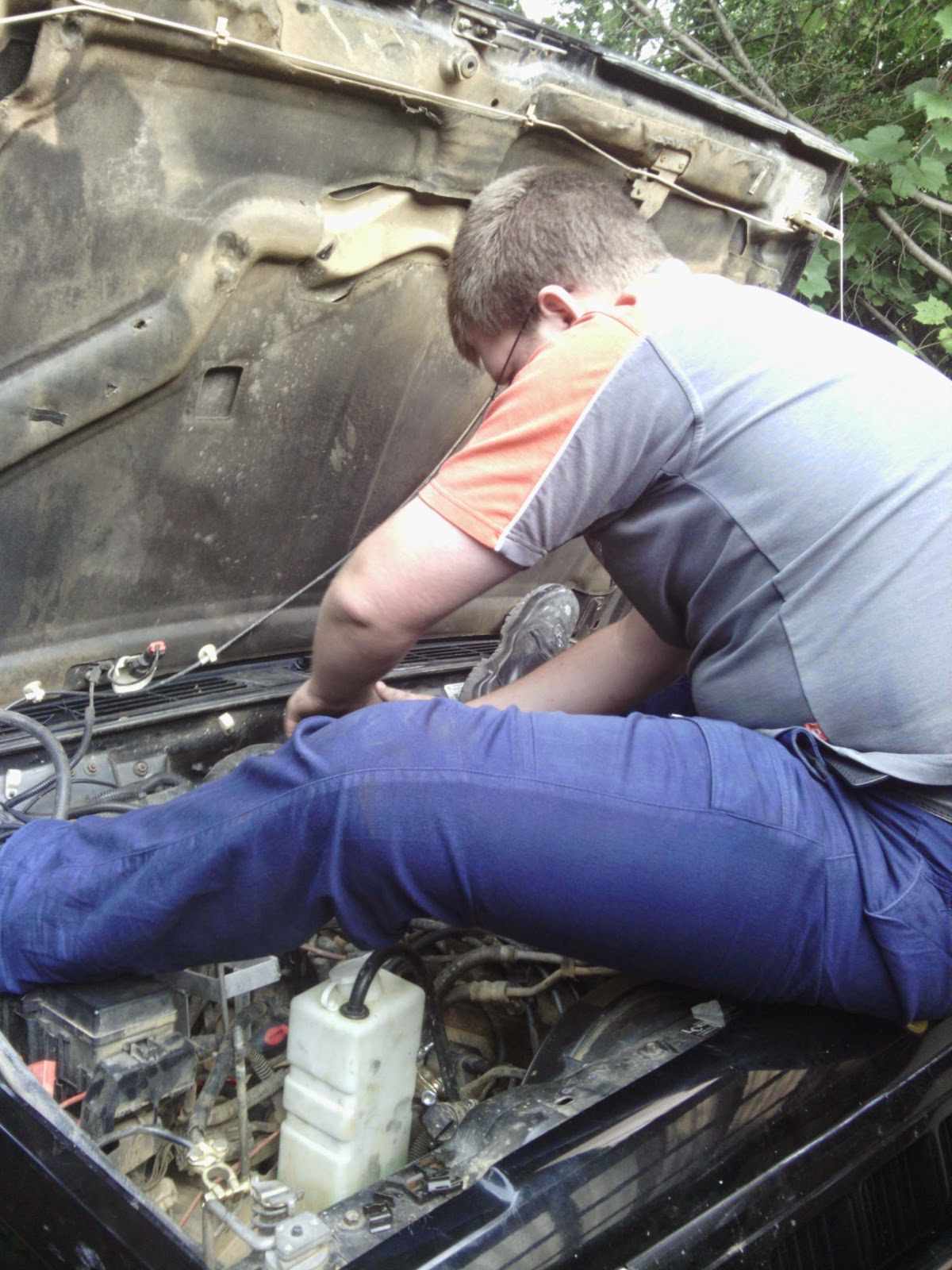 There was also a bolt hidden right at the back that I had no hope of getting a socket onto it so back to doing it the old way with a 5/32" ring spanner. Once I managed to find the damn thing and get it undone this was the sight I was met with: 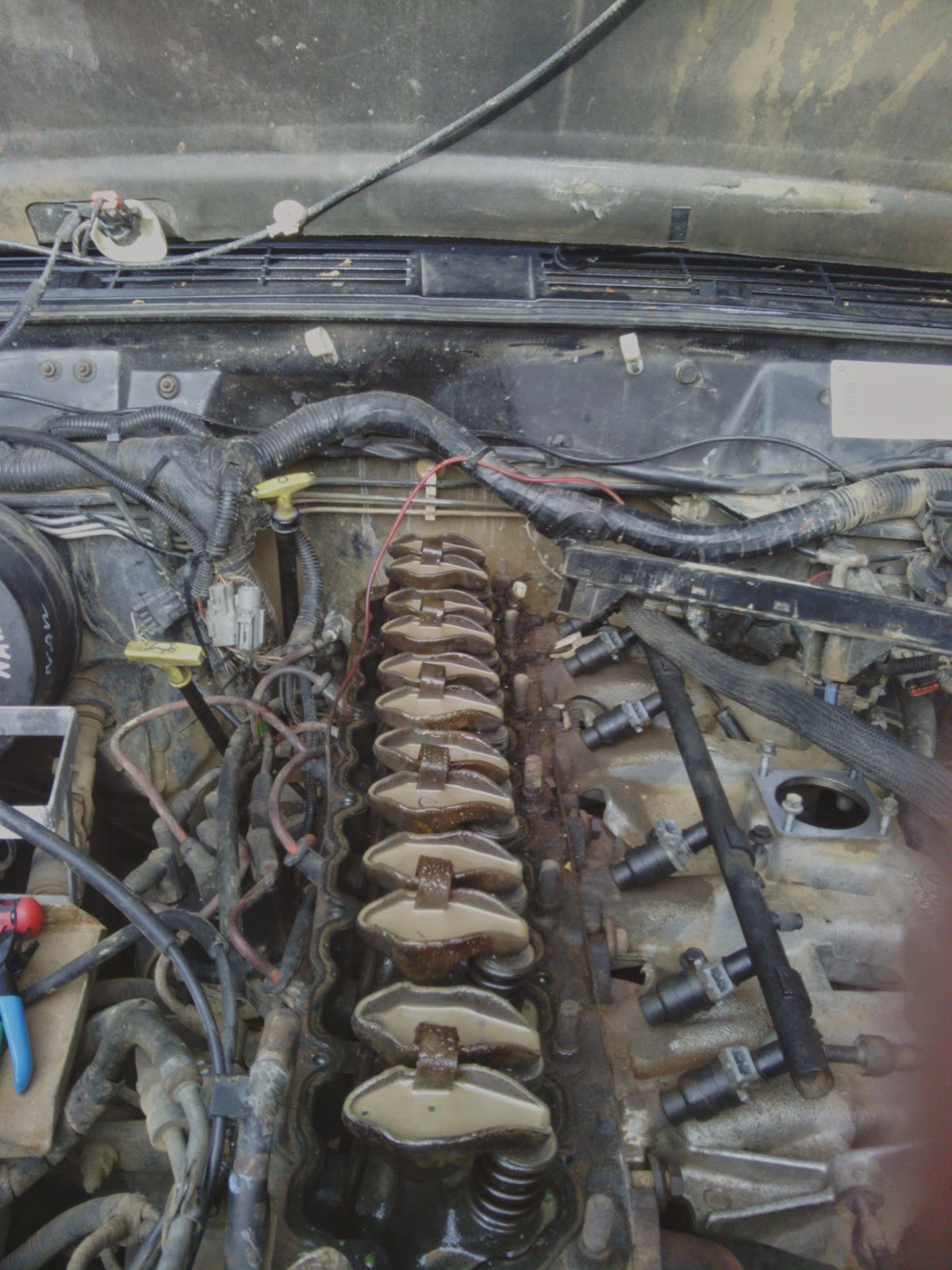 Yes that is more nasty oil on the rockers and even little drops of water on the bridges between the intake and exhaust. That's how much water was in the oil, not good. We'll have to see what else is going to be going on and broken in the next few days getting further down into the engine. So this is what all that looked like after being removed from the engine: 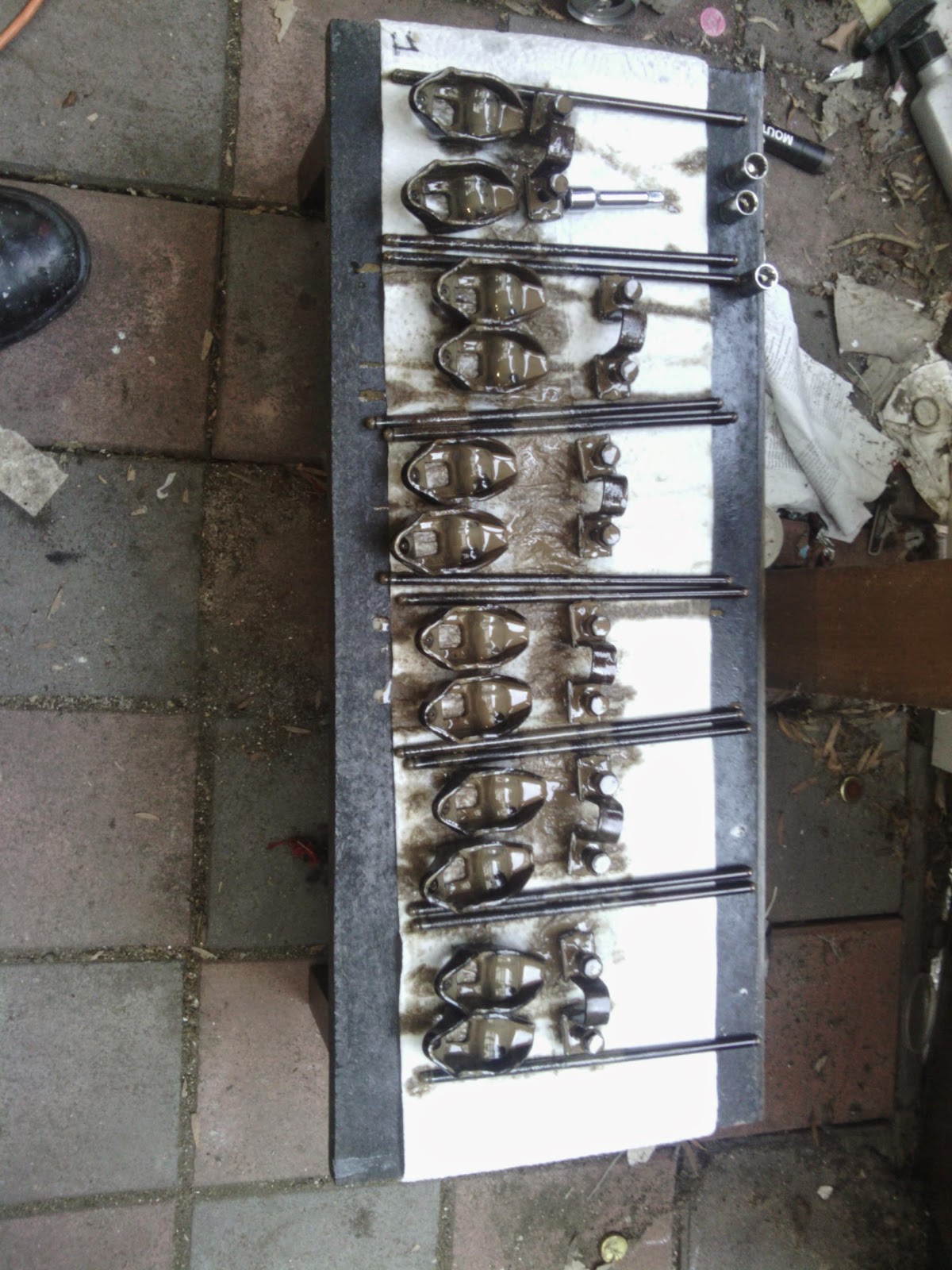 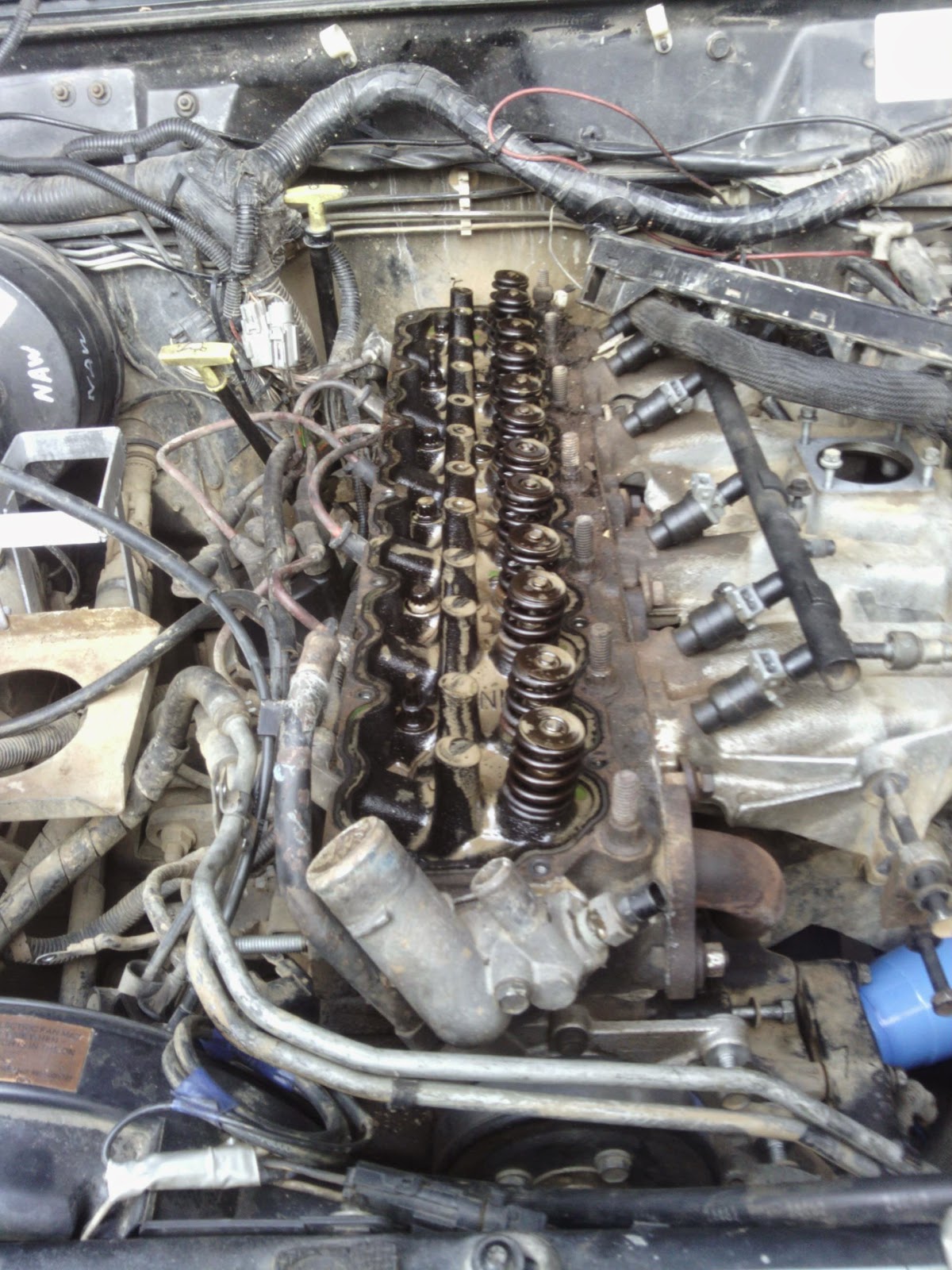 There's a lot of that nasty oil that will need to be cleaned up and hopefully there won't be any surprises while cleaning it all up that can't be at lease ignored until we squeeze the last few thousand km's out of this engine before it is going to need more work than just a gasket.

Today hopefully I'll get the exhaust undone from the headers which should be the last thing left to do before finally removing the head completely.

Last night I got started on my mate's Jeep that I was talking about in one of my previous posts. It had an unfortunate accident with a lake (about halfway up the engine bay) last month and has been sitting out the front in the way since then. It was agreed that I can put it near the back veranda until the start of next month so I'll be trying to get this all finished by then.
After messing about for a few hours we managed to get it running, very, very roughly (3 or 4 cyl out of 6) and clouds of coolant out the back. After getting it going to this point we decided to top up the coolant with plain water then drive it around the back so we can work on it a bit easier. While filling I thought it was taking more water that I expected so I had a little look and water was pouring out around the head gasket. So it looks like I'll be stripping the head off at the least.
This is where it was as I started pulling everything out. If you look closely, on the right hand side you can see the throttle body where the plenum and the air hose from the filter were held on with silastic and fell off while we were getting it started earlier. Most of the oily stains that can be seen are from us spraying WD-40 around to make sure no water was in the electrics. 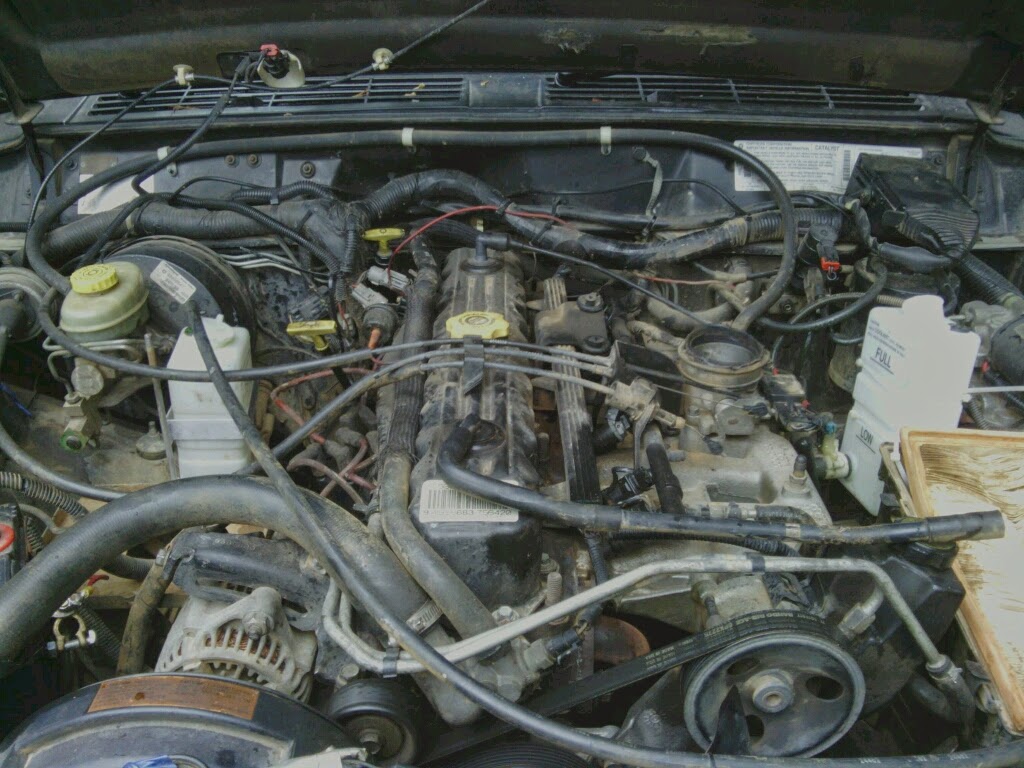 Here is another look into the engine bay. Off to the right you can see the air filter. It has definitely gotten wet and there are small holes in the bottom of the air box that seem to have let water in which has probably contributed to the gasket failing. 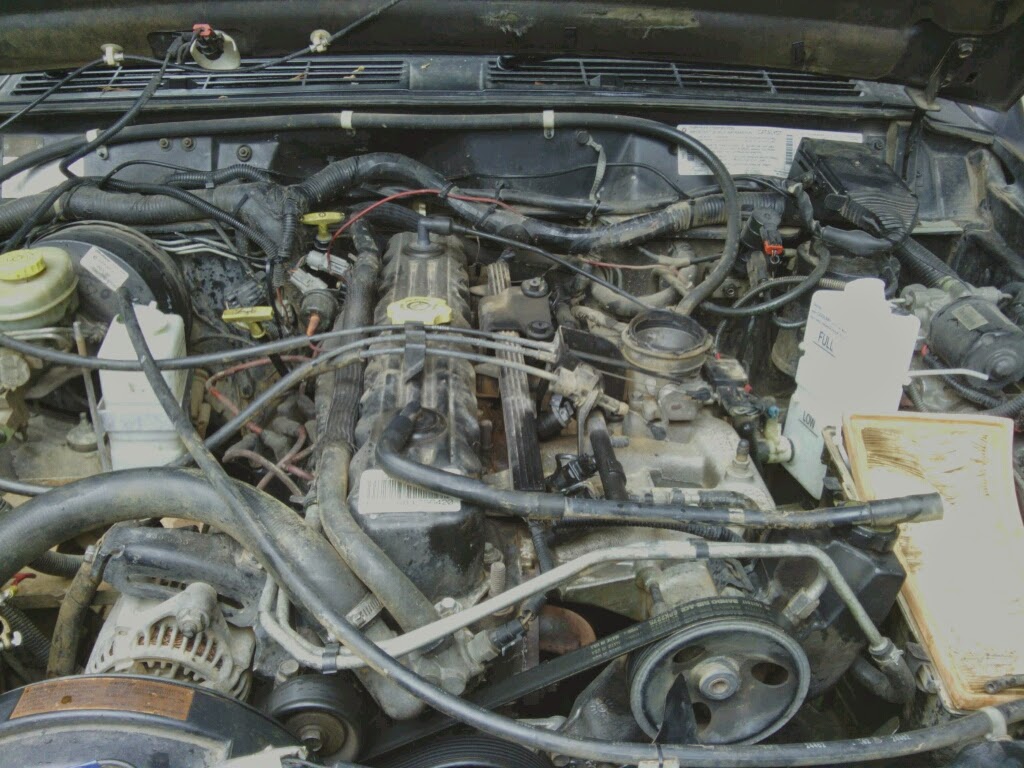 At the moment I have removed the Power Steering pump, fan and alternator. I have also drained the oil and coolant. Unfortunately I didn't get a very good picture as the light was starting to fail, however I will get one this afternoon.

This afternoon is looking like removing the heater hoses, injector electrics and possibly the fuel rail.

If anyone wants more detail on a particular area let me know and I will do up a post on that.