It's been a while but I've finally gotten into some stuff that isn't for work. Recently I have been working on a few projects at work, one of which has involved me learning about setting up Microsoft Access databases with nice interfaces for data input and also for reports being produced.I have also been spending many weekends down at the Tall Ship James Craig where I have been crewing on daysails and helping with other activities.

Yesterday after getting home after a great time aboard I felt the need to do something at home. So I decided to move the water cube that will become a rainwater tank. I have been putting it off for a while because the place I wanted it to go looked like this: 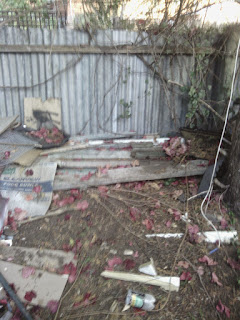 So I cleaned it up, a lot. Then cut out a piece from a pallet I had laying in the yard. As I didn't really have the right tools I cut the skinnier longitudinals with a hatchet and managed to find a bow saw with a slightly loose blade that I used to cut the rest on it as it was too thick to cut by hand. Unfortunately I got so excited while doing this that I forgot to take a picture. So with the base finished and a space cleared all I had to do was shuffle the tank a couple of meters and lift it about 2 feet onto the pallet. This is the finished product: 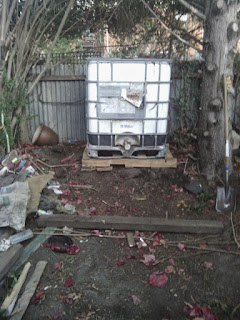 After getting that finished and everything cleaned away I raked a heap on junk that was lying in the yard up to the back so that hopefully the grass that is starting to grow will be able to continue and cover the entire yard.

Once I had cleaned up and admired what little of the cleanup I could see in the dark. I went inside and while on my laptop, running off 12v. I noticed that my VHF radio was receiving a signal. Upon turning up the volume I realised that it was a WIA broadcast that I was receiving from Mt Bindo. While listening I realised that the broadcast was also being sent on HF so I figured this would be a good chance to have a play around and see if I could get the reception better on different bands. I have decided that for now at least I am going to log these reports here so I have them all in one place and so anybody who wants to can follow along with my attempts to improve reception.

I could receive the signal on my Icom IC-730S only on 80m, all of the other bands were empty as far as I could tell. I am thinking this is largely due to my very poo earthing setup that I'll probably show you in a few days or weeks time. On 80m I could pick up the signal fairly well, but I was having a very hard time understanding the words due to some kind of distortion. Hopefully I will get my desk cleaned up and I can plug in my Yaesu FT-7 that I haven't had a chance to try out yet.

I'll be doing my best as I go through my plans to improve my signal. I already have some ideas to improve my earthing so it shouldn't be too long before I get some information up about that.

Work on the next project commencing

Over the weekend I got to start some work on the next project I'm starting. This is the car one. The plan is to turbocharge my mate's 2001 Ford Falcon AU II 4.0L inline 6. The first step in this process is going to be replacing the stock ECU with a custom DIY one, most likely rusEfi. So we went out to my "donor" car that I rolled a few years ago. 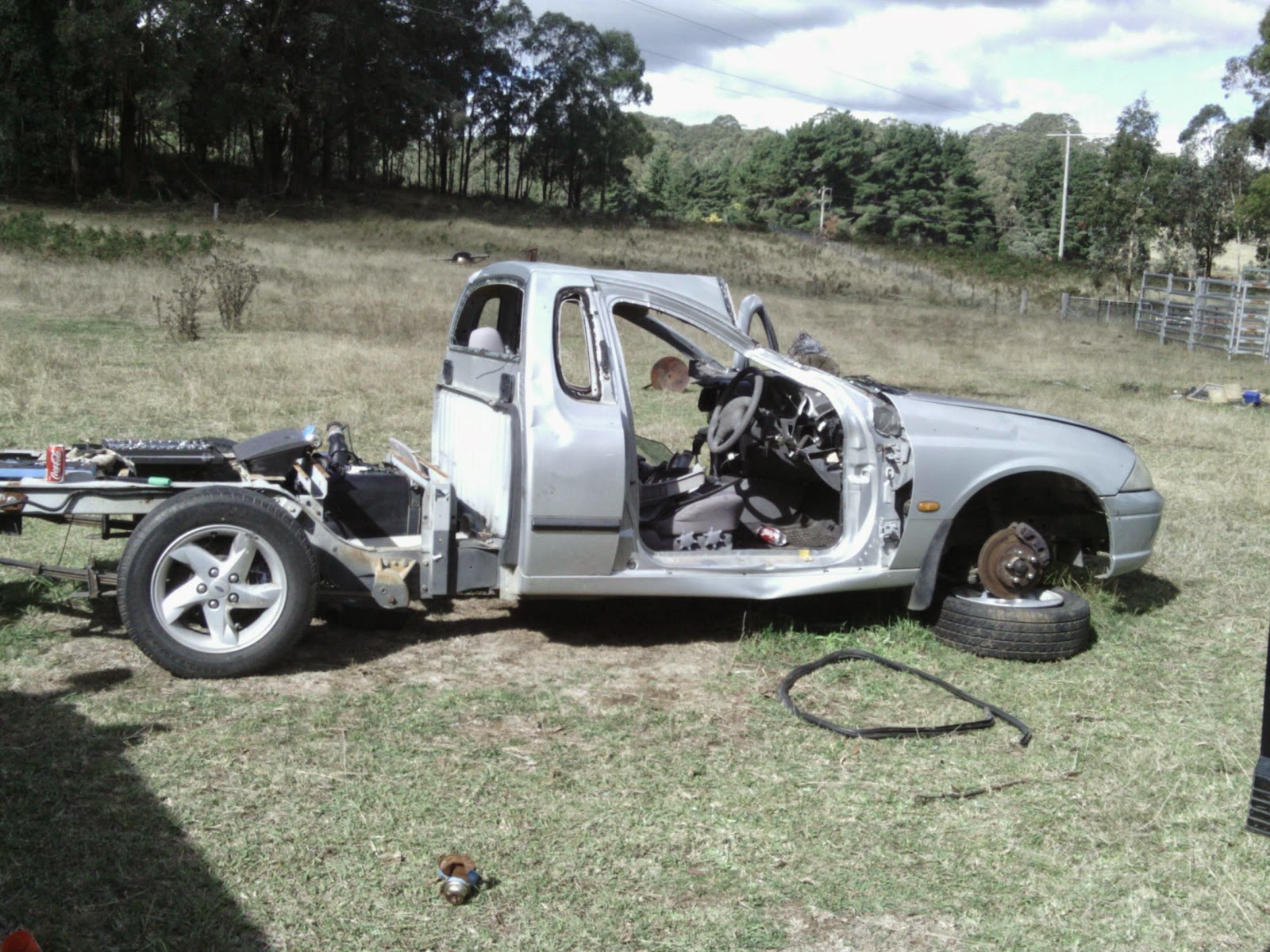 It isn't in particularly good shape, but before water got in it too badly it would run. However now the excellent smartshield immobiliser system is working (BEM and ECU or Key Barrel aren't talking I think) and won't let us even turn it over. We headed out to this in an attempt to get the diff out so we can weld it up and make it "Locked" rather than an "Open" diff. That didn't work because we realised that to get the centre of the diff out we would need to remove the entire back axle assembly. As you can see the outside of the diff was fairly dirty and the muck made it a little difficult to get the cover off. An interesting point to note is the cover had some rust in it, possibly from sitting for too long in a paddock?

Deciding that would be too much work we put the cover back onto the diff and went to work on removing other more interesting things. Julian began removing the remaining few intact windows. He had a process of putting a piece of small wire (from an old tire actually this time) in behind the glass from the outside and working it backwards and forwards until it heated up enough to cut through the caulking holding the glass in place. An easier way to do it is with jumper leads to a car battery so the wire is heated by electrical current rather than friction. However as we don't car about the condition of the body of the car and we didn't have any jumper leads with us we just used friction which also damaged a little of the paint. 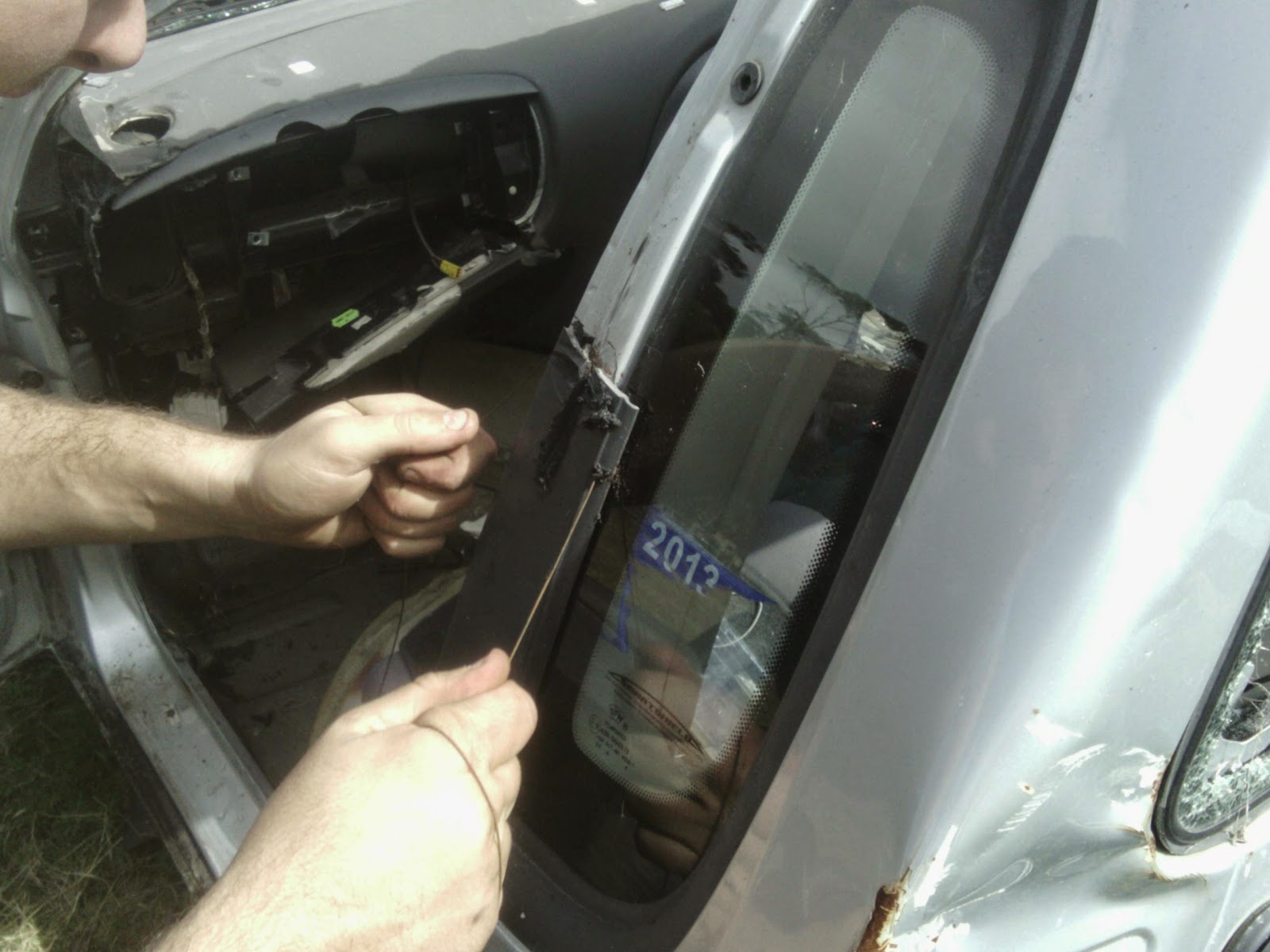 Here Julian is trying to cut out a piece of the trim around the second window so we can get to the edge of it. In the background you can see the damage I managed to do getting the ECU out. That was the other thing that needed to get done while we were out there. So I can easily swap between the stock and custom ECU I am hoping to gut the original enclosure and use the original socket. To get the ECU out of these Falcons first you need to remove a rivet that holds the enclosure down. I didn't have a drill so I used the grinder I got for Christmas. 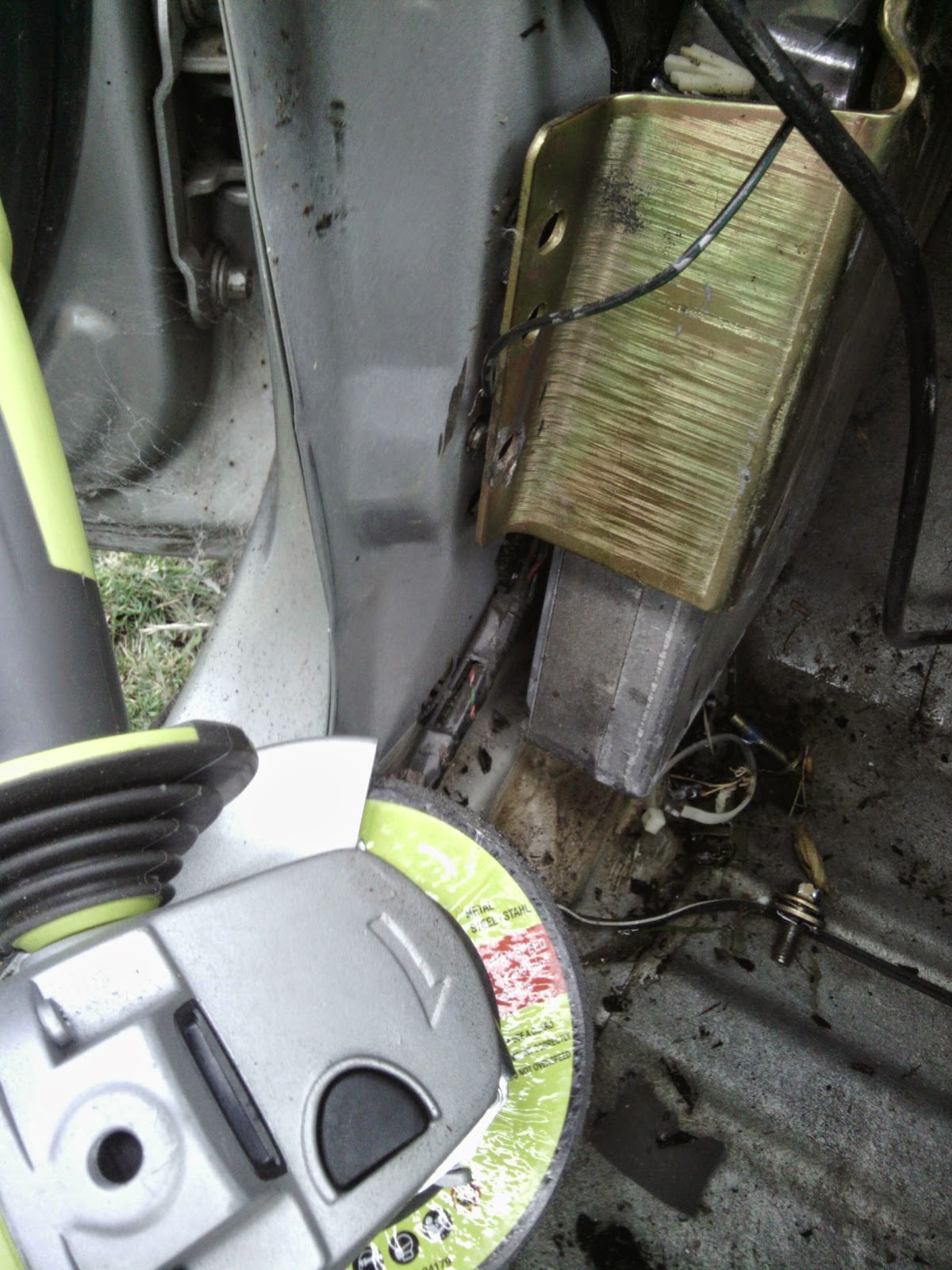 In my case there was also an earthing wire attached to the rivet that didn't really get much in the way of getting it out. Once the rivet is out then the enclosure will just lift off with a little jiggling and rotating. 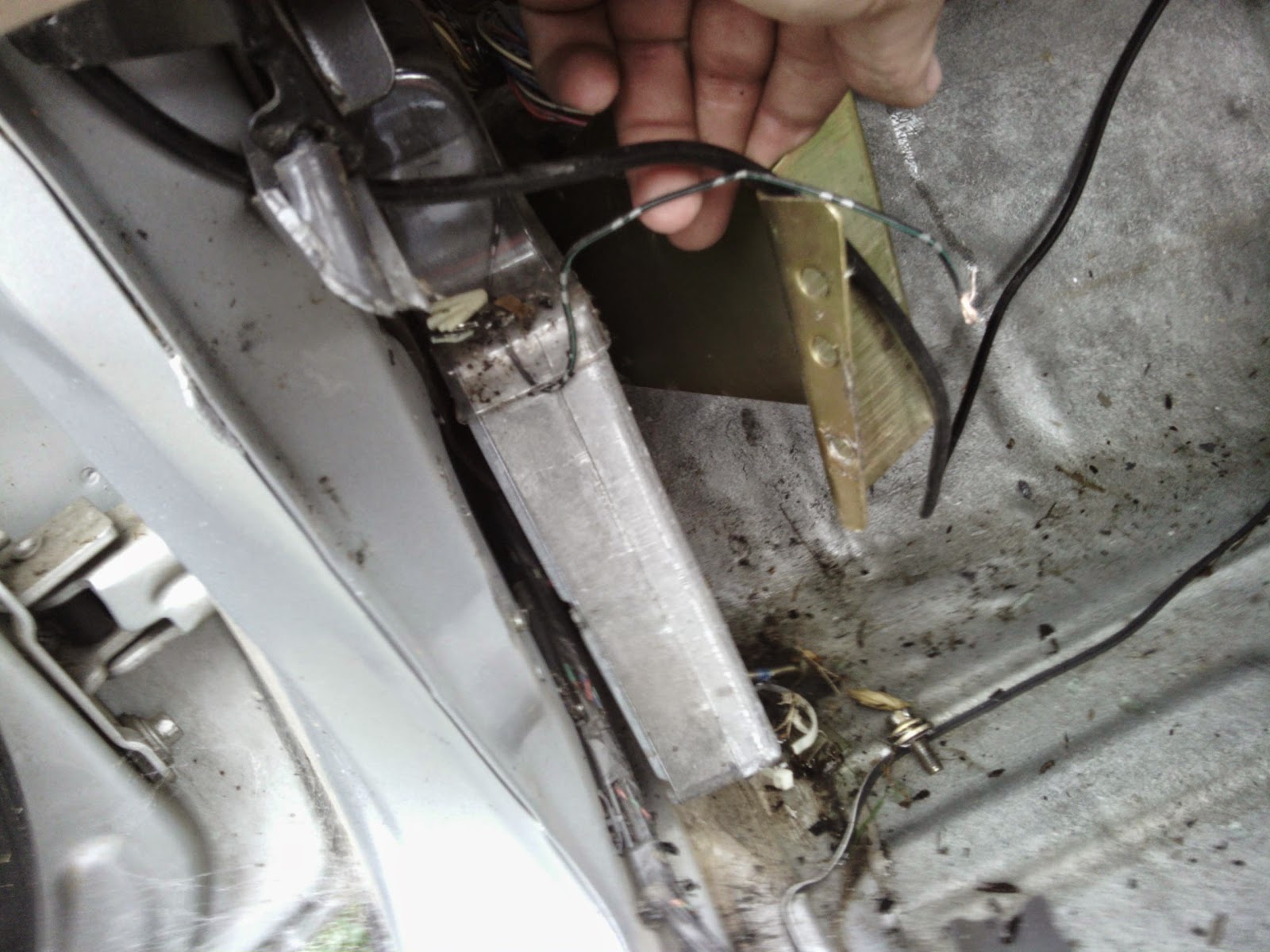 With the enclosure out of the way the ECU just lifts out of the way allowing me to remove it from the car. Either through the week or possibly on the weekend I will start tearing down the ECU to see if I can re-use the enclosure and/or the plug and socket. For now here are some pictures showing more details of the ECU and it's plug/socket. 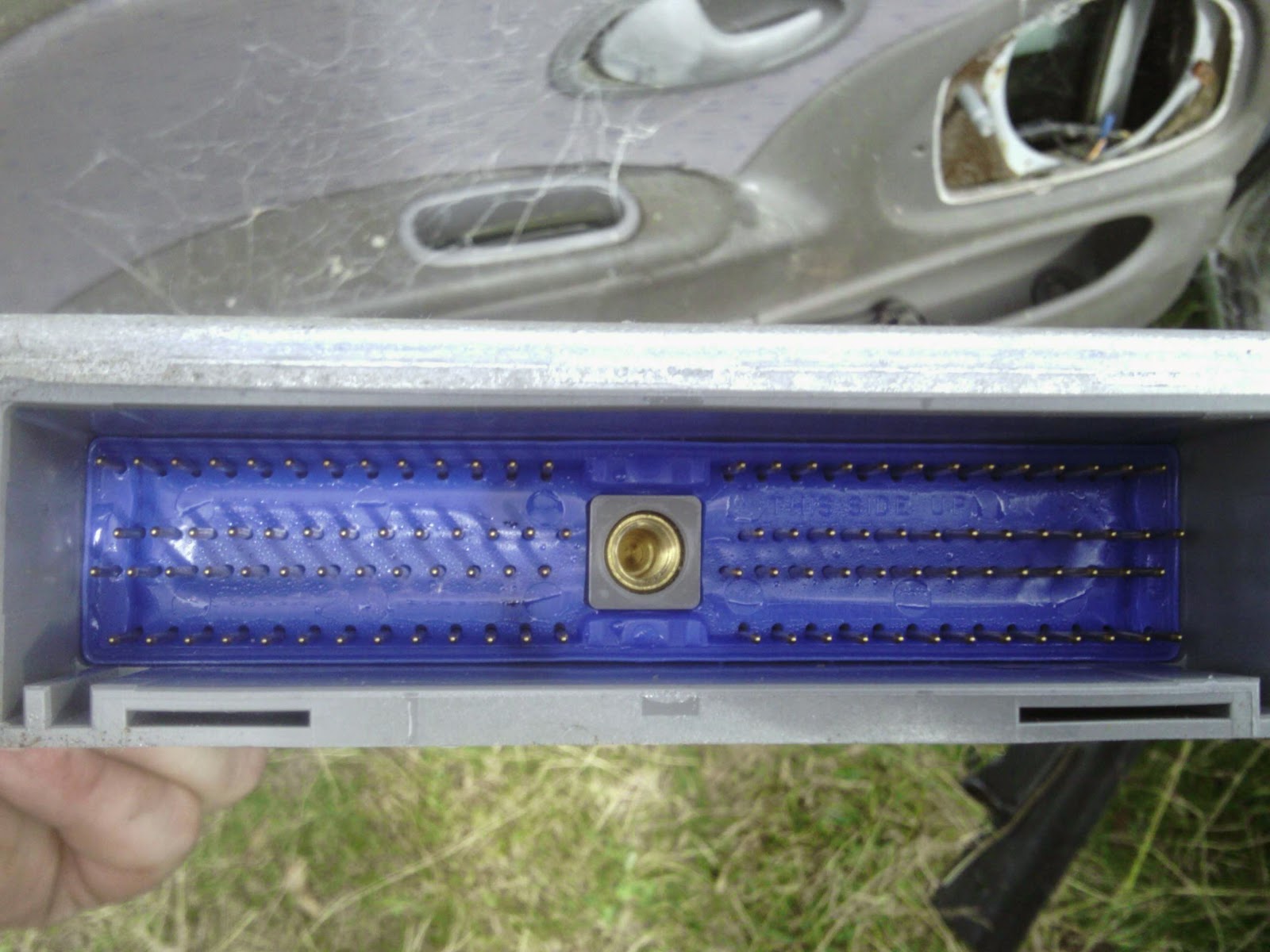 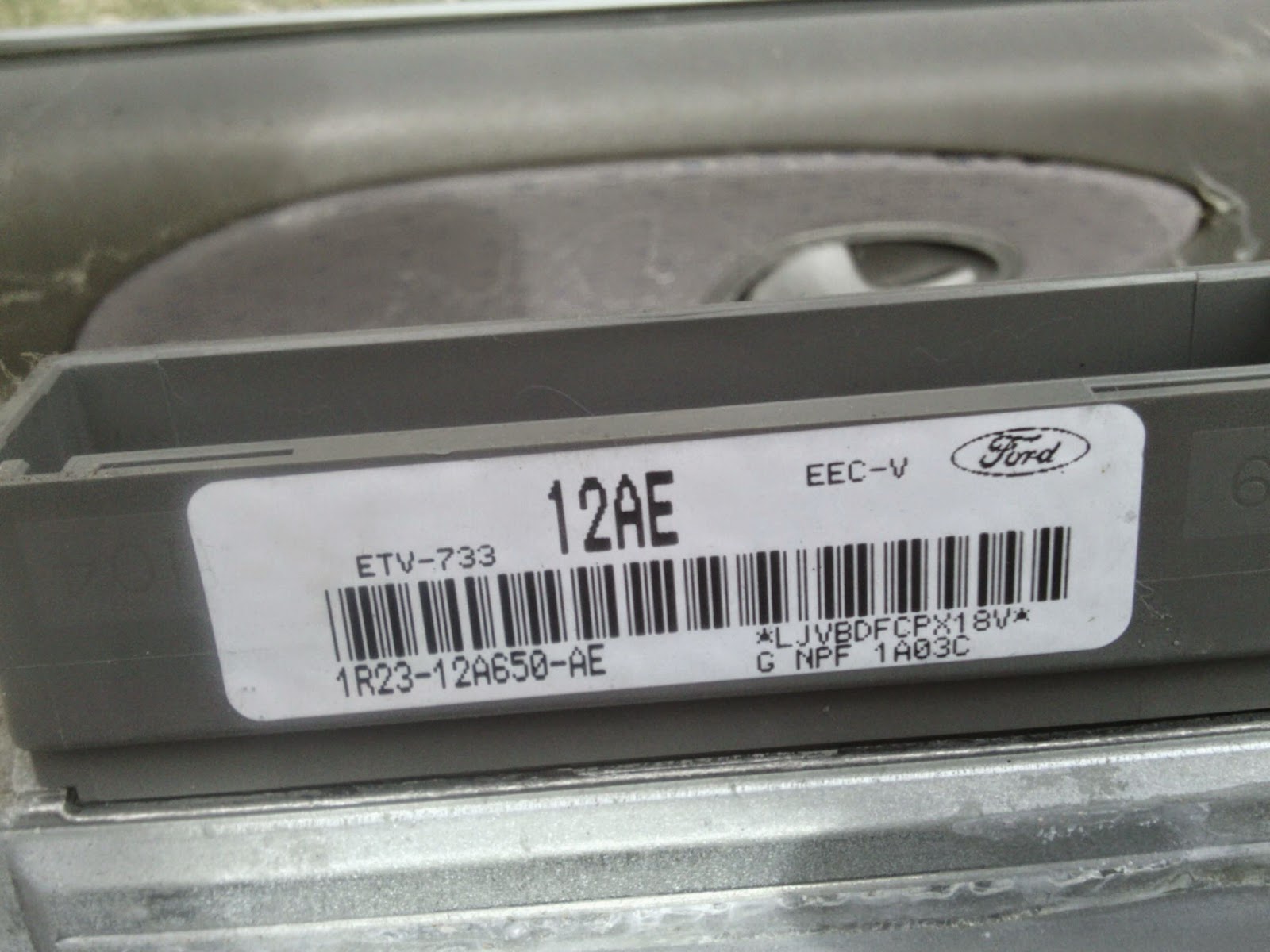 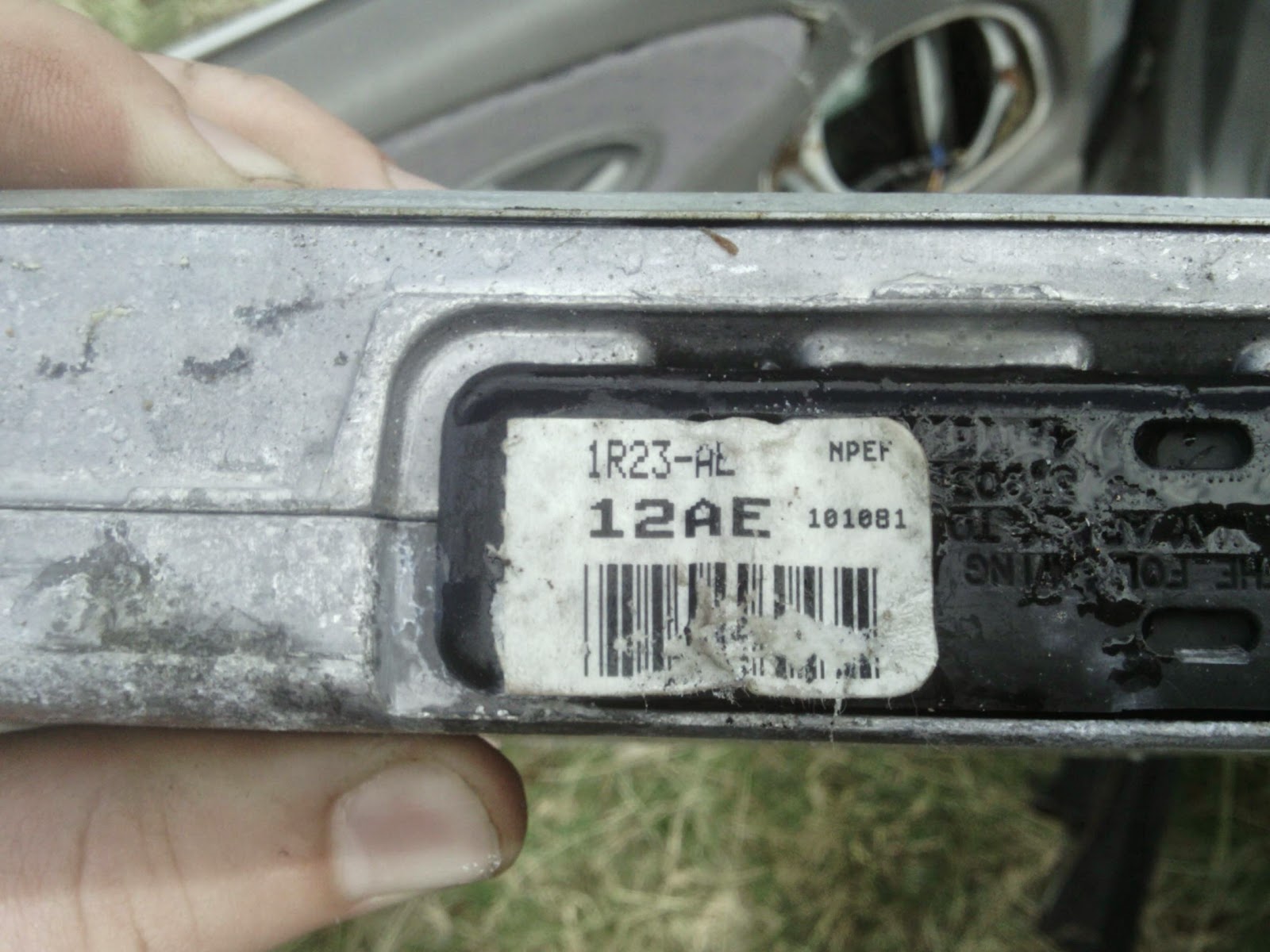 At the end of my last post I mentioned that I had some new projects coming up, one of which involved a long roadtrip. The trip has now been completed and I can show what it was for. 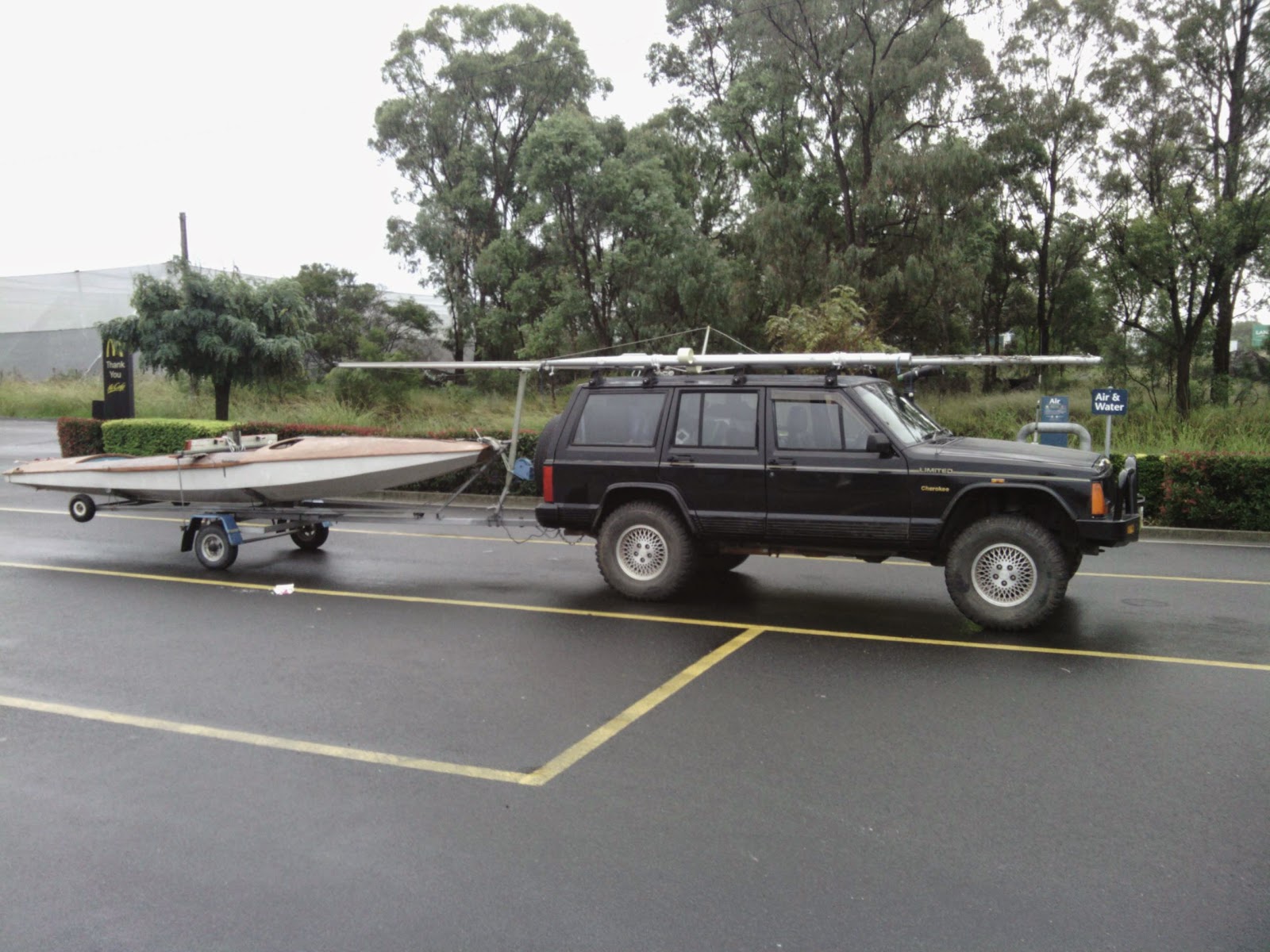 I know it's not a very good photo of the dinghy itself but better photos are coming. The jeep made the ~2000km trip well, with the transmission getting a bit too hot up some of the hills but that's partly down to practice on my behalf.
The plan is to get it out and rigged this weekend if the weather holds. So once we do that I'll be putting up some more interesting photos. In the meantime here's a link for me to remember: http://www.fireball-rigging.co.uk/schematic.html This is a link to a page that has some very nice diagrams of the way these get rigged.

On with it's head, then off again. And a return to normal viewing

So I haven't posted for a while, mostly because I have started to use a camera and have since lost all of the photos.

So the long and the short of it is, that I got the head back on, the engine running and everything good; even booked in for rego. Then the welch plug in the back of the head that I hadn't seen while it was off began to leak. Badly. Eventually I managed to not get it out with everything in place so I ended up taking everything off again including the head. With the head off it took all of around 10 minutes to remove and then install a new welch plug. With everything back on I got it started, no leaks. Phew.

From there I got it registered, drove it for a few weeks, took it to Sydney. Took the old oil that I'd put into it out and replaced it with fresh stuff. and gave it a good clean inside, still needs one outside though.

After Driving it for a while I noticed a strange noise from the front end while in 4wd mode. Solution 1, change the oil in the front diff and check what it loos like inside. No dice. Next, start researching online. One option seemed to be that it was "Angry Sparrows" or a squeak from something potentially worn in the front drive shaft. So off with that. It turned out to be a piece of cake, just 8 bolts to remove. Upon inspection I discovered the the apparent reason for the noise was a lack of grease in the ball in the middle of the double carden (CV) joint near the transfer case.

After pulling the double carden apart and damaging(?) one of the universal joints grease was worked into the ball because a replacement kit was around $100 which is somewhat more than I was willing to spend. Everything got re-assembled and then a short drive was taken. Silence, no more angry birds for me.

With that fixed I started to think about the trip I am leaving on tonight and the fact I will be towing a trailer ~1000km each way in an automatic of less than ideal status. I looked into a transmission oil cooler and discovered that there was already one installed. I also wanted to be able to measure the oil temperature so I installed a SAAS oil temp. gauge as a transmission temperature gauge. The install was very straight forward and didn't take too long except for the cutting of the hard line. That had to be done by hand with a hacksaw blade as we had nothing else that would fit in the small space.

Until next time, Cheers.
Rex